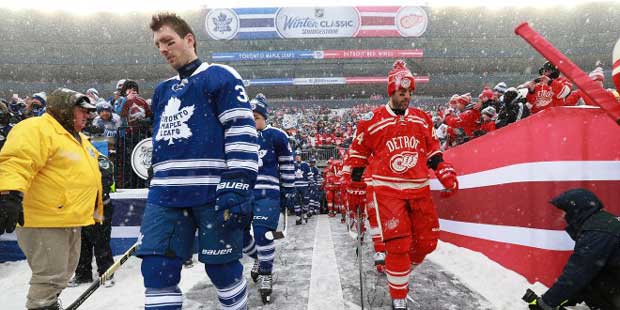 The Toronto Maple Leafs face off against the Detroit Red Wings in the Winter Classic on Jan. 1 2014. Dave Sandford/Getty Images

Getty Images will allow blogs and other non-commercial publications including social media platforms to use their photos free of charge the company announced today.

Getty Images are used in major newspapers and magazines, so free access to high-quality photos means bloggers and journalists will be better able to tell their stories.

“I use stock imagery nine times out of ten when I write on my blog, I now have a significant new pool of resources of stock images to not just emphasize my blog content. It makes it easy,” says Erika Napoletano, a branding consultant and author of two books including “The Power of Unpopular”.

Napoletano says she was previously spending $100 – $200 per month using stock photography on her blog and the blogs of her clients. Small-to-medium sized bloggers like Napoletano will benefit from Getty’s announcement.

Starting today, Getty announced they will release 35 million images free to use for non-commercial use, such as blogs and social media. Getty Images primarily sells their photos, and the change of strategy doesn’t mean they will stop selling, but see the change as an “opportunity”, Craig Peters, senior vice president at Getty Images told Bloomberg Businessweek.

Getty Images bought PicScout in 2011 which tracks the use of Getty Images across the web. Peters said there were “tens of millions of pictures being used.”

Getty Images will provide an embed link to all photos that get used, and all pictures will contain a link reverting back to the photographer’s information.

“It’s a small victory for someone like me because people are going to know where it came from,” says Dave Sandford, a professional photographer who has worked for Getty Images, as well as the NHL.

Ultimately, its about credit, says Sandford. When Getty Images or the NHL hire him as a photographer he gets paid for his time and the shots he takes, but makes no residuals if a photo ends up on a billboard or gets used in advertising.

“I tell people, it’s take it or leave it. If the NHL or Getty wants to do something and you want to work for them you got to abide by the way they want things done,” said Sandford.

The fact users can go back and find out who took the photo is relevant to him growing his business, says Sandford.

“For me it’s important that my name is attached to the work that I do. It might open up a door to another opportunity when people see an image they know who took it.”

According to socialbakers.com, 93% of the most engaging posts on Facebook included photos. For Napoletano, having access to Getty Images is an excellent marketing tactic to use in social media.

“Especially for emerging bloggers who don’t have a budget for individualized photography. I think its an incredibly powerful tool,” says Napoletano.

Not all blogs know just yet how they will capitalize. BlogTO told Humber news in an e-mail statement that they will, “take a wait and see approach.”

While photographers work can now show up on small-time blogs and across social media, the hidden benefits including name recognition are key positives for Sandford. While it may not be ideal, he says this won’t be enough to get him to lose his passion, and says that’s just part of the gig.