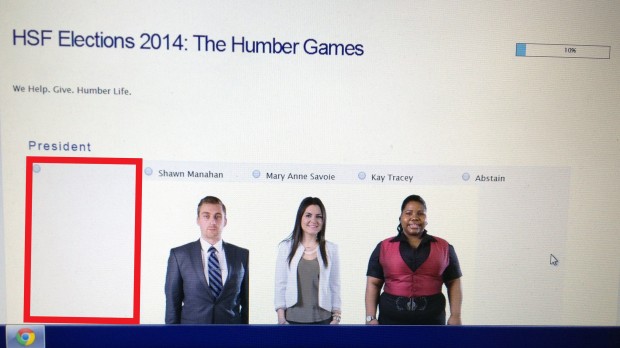 Humber Student Federation President Tim Brilhante has been disqualified as a candidate in this year’s HSF elections and has been removed from the ballot.

Students who went to cast their votes at polling stations today were unable to vote for Brilhante for HSF president.

So far there has been no reason given as to why he’s been ousted.

“I don’t feel they’ve provided sufficient evidence for these harsh decisions, and I’m not even being allowed to dispute it,” said Brilhante.

“I’m curious to know the voting count as of Thursday,” said Brilhante. “They won’t release that information and I think as students we should demand to hear it. I think students have the right.”

Brilhante urged students to express their discontent professionally and respectfully, and said he’s still committed to serving and representing HSF as president for the rest of his term.

Below is a cellphone photo of the presidential ballot Friday morning.

Cell phone picture taken at polling station Friday morning with a blank red rectangle where Brilhante used to be.

Earlier today, Brilhante confirmed on his Facebook page that he has been disqualified.

Here is his statement in its entirety.

Students who cast their votes prior to Friday are reacting to the removal of Brilhante in the middle of the voting process. A number reacted immediately to the Facebook post.

Third-year bachelor of commerce student Paul Paquette, 24, finds the removal Friday to be undemocratic. “I voted for him Wednesday, I went to school in the snowstorm,” said Paquette.

“I probably won’t vote again. I wanted to vote for Tim,” he said. “It’s a waste of funds.”

Humber News has contacted Chief Returning Officer Natalia Toussaint, who is refusing to comment until after the polls close at 4 p.m. and a meeting has been held with all the candidates.

According to humberlife.com Toussaint is in the second year of the Bachelor of Public Relations program at the Lakeshore Campus. The website says her job as CRO is to oversee the elections and make sure they are run in a fair and unbiased manner.

All disciplinary action is subject to the discretion of the CRO.

We’ll have more details on this breaking news story when they become available.

The policy also warns candidates that the elections administration team can proceed to any of the three steps if they consider the violation severe.