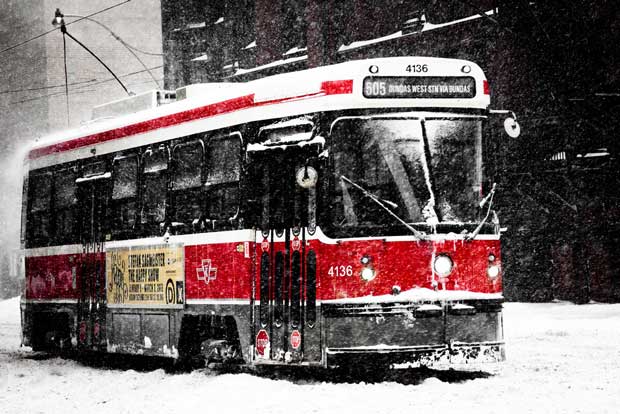 The TTC’s overnight busses and streetcars should be free of charge during extreme cold weather alerts, says a Toronto city councillor.

Councillor Josh Colle brought forward a motion at the last transit committee meeting, asking the TTC to study the issue along with Toronto Public Health, and the city’s shelter, support and housing department.

“Staff are looking into the matter and will report back on costs,” said a media spokesperson from the TTC. No timeline was given for when an answer can be expected.

So far this winter, 32 extreme cold alerts have been issued. Over 5,000 TTC tokens have been given out this year at homeless shelters around the city, more than double the average number of TTC tokens issued to people who are homeless every year from mid-November to mid-April.

“Extreme cold can be dangerous and deadly for people who are homeless,” said Michael Shapcott, director of housing and innovation at the Wellesley Institute.

If implemented, this service would allow people who are homeless to access services like shelters and warming centres.

“The services created are not evenly distributed throughout the city,” Shapcott said. “Having free TTC would allow people to get where they need to get.”

Shapcott said this policy would also give people who are homeless the option to ride the bus or streetcar all night, which is not ideal, but at least provides an alternative.

Other cities in Canada provide different options to make public transit as accessible as possible. Regina and Calgary both offer discounted monthly passes to low income earners all year.

Shapcott noted that while this new initiative is a good thing, it fails to bring up other important issues.

“The bigger problem is not cold winters, but hot summers. More people die of weather related injuries in summer than winter,” Shapcott said, citing a Board of Health report.

“Toronto weather is becoming more extreme,” Shapcott said. “The policy has to take into account extreme heat alerts in the summer as well.”

Shapcott was pleased the TTC is considering this move, but emphasized it is not a permanent solution.

“People who are homeless are extremely vulnerable to extreme weather. Free access to TTC is a necessary band aid that might keep people alive, but it’s not tackling the real issue,” he said. “How is it in a city as rich as Toronto, the best we can do is let you on the TTC for free a few nights a year? I guess Mayor Ford has more important things to do in Los Angeles.”