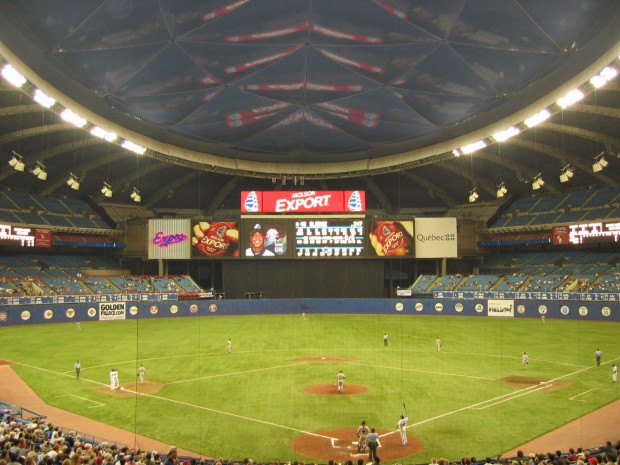 A baseball game being held at Olympic Stadium in 2004. Courtesy Wikipedia.

The Toronto Blue Jays are bringing professional baseball back to Montreal for the first time since the Expos left in 2004.

“There’s obviously a lot of attention on what’s going on and the viability of bringing baseball back there even though it’s at a stadium that’s untenable at this point in terms of hosting a team on a regular basis.”

The Big O, as it’s often called, will host the two exhibition games. The last time a baseball game was played there was on September 29, 2004.

Montreal is looking to spark interest and reinvigorate their once-robust market of baseball fans. Toronto is looking to tap into a new market as Canada’s lone baseball franchise.

Former Expo Warren Cromartie told The Globe and Mail he is optimistic about the prospect of baseball being a profitable venture in Montreal.

“This will be a little bit of a measuring stick,” Cromartie said.

In terms of baseball returning to Montreal on a full-time basis, Stoeten said there are a lot of obstacles.

“I think it’s going to be tough,” Stoeten said.

As for the Jays, expanding their market into Montreal appears to be the next step in their business model. The team is popular out west as demonstrated by the number of Jays caps and jerseys in the crowd when Toronto visits Seattle. The audience in Quebec has yet to truly embrace the Jays.

“Just to expand their market is a really smart thing. They’re on TVs all across the nation so it makes perfect sense,” said Stoeten.

The exhibition games will be held on Friday and Saturday. They will wrap up spring training for the Blue Jays before they head back to Florida to begin the regular season.