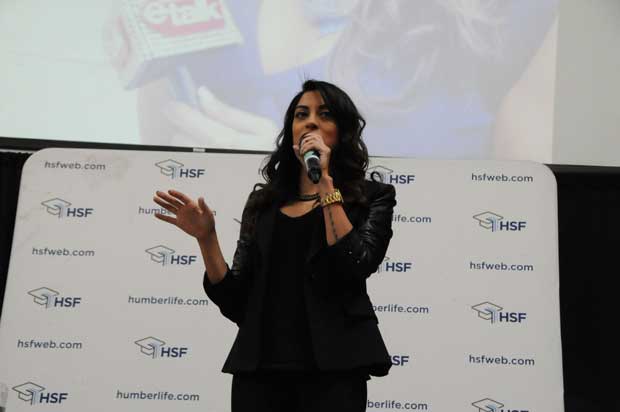 The speaker at Humber College’s International Women’s Day on Thursday had very little to say about women’s issues.

Aliya-Jasmine Sovani, an MTV personality, spent 30 minutes talking about her world, and her struggles with body image before ending her speech asking women to think about what they can do to change their world.

When asked by Humber News what the issues women in Canada face, she paused before responding, “There are a lot of answers to that question.”

Her eventual response was the issue that she personally considered most pressing, the lack of media coverage of the plight of aboriginal women.

Did HSF make the right choice?

This was the third year in a row Humber’s Student Federation invited a recognized MTV Canada personality to speak at both the North and Lakeshore campuses for International Women’s Day. Jesse Cruickshank spoke in 2012 and 2013.

Sovani, best known as the host of MTV Canada’s 1 Girl, 5 Gays, spoke at length about her experience working in the media and her physical appearance. Sovani, who has prominent scars on her body from a car accident, says images of her body are constantly photoshopped to have them removed.

She also spoke about her work in raising breast cancer awareness with a viral video, starring a bikini-clad Sovani, titled “Save the Boobs” and her documentary work with young girls in South Sudan.

While efforts to celebrate International Women’s Day are important, some might question why HSF is continually choosing television personalities over women in politics or business, who may not be as glamorous, but may have more to say about the topic.

“Glamour doesn’t hurt if the message is well thought out and sophisticated, but glamour by itself isn’t a persuasive enough argument to bring someone to campus,” said Ann Rauhala, an expert on media coverage of women’s issues at Ryerson’s School of Journalism.

Colin Edward-Crewe, HSF VP of student life, says Sovani was chosen because of her success in the Canadian entertainment industry and her name recognition would attract more students to the event.

“I think one of the most important things when it comes to events about trying to spread awareness is having a name that’s going to draw attention,” said Edward-Crewe. “You can have the most fantastic message in the world, but if no one’s there to listen to it, it’s not going to do it justice.”

A Guelph-Humber journalism student raised the question of whether she was an appropriate choice in the session’s Q&A. Sovani’s response was that any woman has a right to speak on International Women’s Day.

“I came here to tell my story,” she said.

The HSF approach to International Women’s Day differs from what was happening at other Toronto campuses.

York University celebrated the inspiring change theme with a host of relevant speakers at their Keele campus, including MP Olivia Chow and aboriginal elder Laureen Waters.

The University of Toronto ‘s Mississauga campus held an International Women’s Week on inspiring change, with panels, screenings and activities, as well as free food and admission.

University of Toronto’s Rotman School of Management hosted a panel of four women in business, including Centennial College President and CEO Ann Fuller. All four speakers at the event were named in Women of Influence’s top 25 of women of influence in Toronto.

Ryerson University has hosted a number of panels throughout the week, the topics including politics and leadership and violence against aboriginal women. “We looked really critically at how the media covers violence against women,” Rauhala said. “It was a very lively discussion that informed everybody who was there.

“If you’re a woman who’s paying attention in our culture, feminism should matter to you.”

Given that the word feminism was never used in Sovani’s speech, finding a different voice for women’s rights may be the next step for HSF.