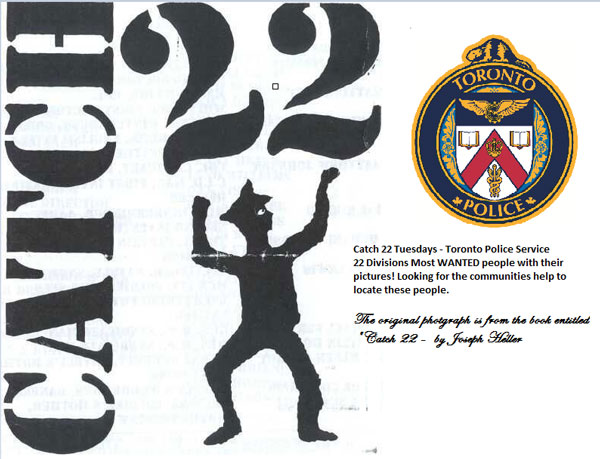 A number of police divisions in Toronto have launched programs such as 22 Division’s Catch 22 initiative that use social media to help bring suspects in off the street. Courtesy Toronto Police Service

In recent years a number of police divisions in the city have embraced social media as a way to get the word out about wanted suspects.

In February 2013, 22 Division launched their Catch 22 program, which, in addition to having wanted suspects’ information and mug shots published in the Etobicoke Guardian and online through Inside Toronto, also takes to social media.

So far 37 of the 49 suspects featured in Catch 22 postings have been arrested, which translates to a 75 per cent arrest rate, McGrade told Humber News.

The idea came from 55 Division, where a similar program is run, said McGrade.

Others have joined the fray; according to an Inside Toronto article, 11 Division, 53 Division, and 51 Division have all started similar projects.

Due to Catch 22’s early success, McGrade said 22 Division was going to continue operating it unchanged as it enters its second year.

“I think because (Catch 22) has worked so well, we’re going to keep it at the status quo,” he said.

While the responsibility of implementing programs such as Catch 22 rests with individual police divisions, Const. Wendy Drummond, a Toronto Police Service spokesperson, “absolutely” expects to see more and more launched.

“We’ve seen great success in doing it and the other divisions are following suit as well,” she said.

The decision to use social media in crime-fighting efforts stems from the broader shifts in the way people are now getting their news, Drummond explained.

“(News) is no longer just from the TV, it’s no longer just in print – it’s mobile. And that’s where a lot of the newer generations are getting their information from, and we’ve adapted to those different social media platforms as well.”

Alongside programs through Toronto police divisions, Crime Stoppers has also made more use of social media in recent years.

“You can call (Crime Stoppers), you can text them, you can leave a tip on Facebook, there’s a free Crime Stoppers mobile app on Itunes, Google Play, or Blackberry App World, so the availability is there for a multitude of platforms,” said Drummond.

Social media and mobile technology may play a heightened role in crime fighting, but Drummond also said other time-tested approaches are still relevant.

“I think our traditional ways are still beneficial for sure, especially the all news broadcasts that are consistently showing images and updating them. It’s definitely something that reaches millions of people,” she noted.

As for what kinds of cases are taken to social media, Drummond said it’s “based on a case-by-case scenario.”

“Taking (cases) to the public for their assistance is something that’s highly effective and efficient, and in some cases it is the final step that investigators need,” she said.

Henri Berubi, coordinator of Humber’s police foundations program, said the movement towards social media is logical, and that it builds on what police have done in the past.

“I don’t see it as a revolution, I see it as an evolution,” he said of social media use, likening it to the robocalls system police have used before.

Robocalls – which are automated telephone calls – have been used to inform people of developments in their community, such as the announcement of a wanted suspect in the area, he said.

“(Social media) is just another way of doing the same thing only more effectively,” he said, adding, “it enhances the type of communication, the quality of it, and the speed.”