Toronto man to run Boston Marathon twice, in one day 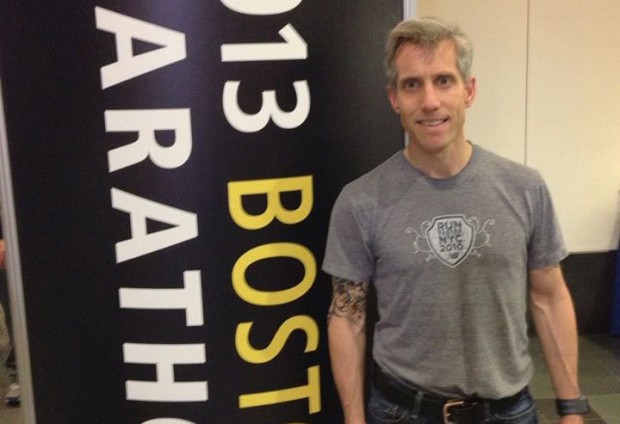 Jean-Paul Bedard is training to run a double Boston Marathon this spring. That’s 84.4 kilometres or 52.4 miles in one day.

Bedard, an accomplished Toronto long distance runner, will start the race around 4 a.m., running from the finish line to the start line and back again.

Between marathons, he’ll take a one hour break and will start the second leg of his race while the other runners are just beginning.

This won’t be Bedard’s first marathon, he’s run over 75 already, including eight in Boston and  several ultra marathons.

He’s using the double marathon in Boston as an opportunity to raise funds for the The Gatehouse, a charity that helps survivors of childhood sex abuse.

So far over $10,000 has been raised for the charity, but awareness is just as important said Brad Hutchinson, The Gatehouse manager.

“It’s not only the money, which is great it helps keep us sustainable, but it’s also the awareness probably more than anything that will help to serve the community and make it healthier.”

Bedard became involved with The Gatehouse last year after disclosing his own abuse as a child to close friends and family.

“I attended a couple of their programs last year and they were instrumental in helping me get my life back on track,” said Bedard. Since completing the programs at The Gatehouse Bedard decided to give back and continues to work with the charity as a volunteer.

Bedard said he was brought up in a physically abusive household and struggled with drugs and alcohol as a result.

“Everything started to spiral out of control in my early teens and continued through my early 30s,” Bedard wrote in an article for the Huffington Post.

It was years ago, in a 12-step program to overcome his addictions, that Jean-Paul discovered a new release, “running ‘found me’ — or what I now believe — running ‘saved me’,” Bedard wrote in the article.

In that program, Bedard met two other men who were training for a marathon and asked if he could join in on their long run each week. The three men completed the marathon together, and qualified to run in the prestigious Boston Marathon.

Many years and many marathons later, Bedard was back in Boston running in the 2013 marathon.

Midway through last year’s race dark memories of his childhood surfaced.  He stumbled to the curb and choked back tears as medical aides pulled him into a tent to make sure he was okay. Bedard had to explain he was mentally hurt, not physically. He was able to pull through and cross the finish line in four hours.

“I need this, I’m not going to walk away from it.”

Shortly after he finished, chaos erupted at the finish line. The first of two pressure-cooker bombs went off. Then the second one.

Days after returning back to Toronto, Bedard was diagnosed with post-traumatic stress disorder.

“When I came back I felt pretty devastated, I was already in the Gatehouse treatment program dealing with the childhood sexual abuse so I was fairly fragile as I went into the marathon,” he said.

An english teacher in the TCDSB, Bedard swore he would never return to the city that caused so much stress.

“When I got back to Toronto I had convinced myself that I would never go back to Boston again, it was just too devastating,” said Bedard. “But over the course of a couple of months being back I thought that it was really important to go back to Boston.”

This year’s race will symbolize what he’s been through, as a victim of child abuse and the trauma of the Boston bombing.

“What the double marathon will be, I plan on the first half going from the finish line all the way to the start line, that’s going to signify a kind of rewinding of what happened not only in my childhood but also last year in the trauma in Boston, and then I’ll use the other direction, going back the other way to be sort of bringing my life forward and bringing the events  forward into a better place. So that’s sort of the significance of going one way and then bringing it back the other way.”

I think everybody is going back almost with a vengeance saying these are our streets and we need them.

Amidst all the stress and trauma of the bombing and the childhood memories Jean-Paul just kept running. Quitting running was never even a consideration.