Sweeping changes to the Citizenship Act will mean tightened requirements, longer wait times for applicants, and harsher punishments for fraudsters 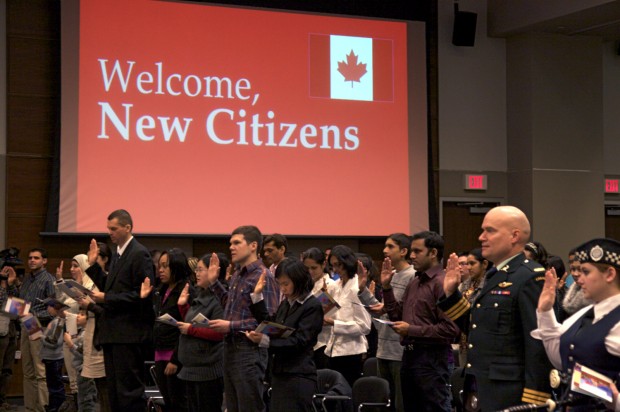 The federal government has introduced a series of changes to the Canadian Citizenship Act. The overhaul will implement longer wait times before would-be residents can apply for citizenship, more stringent language requirements, and harsher penalties for fraudulent applicants.

The legislation, Bill C-24, is being touted by the government as the most significant overhaul the Citizenship Act has seen in almost four decades.

“Citizenship is not a right, it is a privilege,” Chris Alexander, Minister of Citizenship and Immigration, said in an announcement Thursday.  “Canadian citizenship is uniquely valuable in the world, a weighty privilege that involves both duty and rights, community and responsibility.”

The ministry projects that the bill, called The Strengthening Canadian Citizenship Act, will streamline the process and reduce the current backlog by more than 80 per cent by 2015.

Under current law, would-be Canadians have to reside in Canada for three out of four years before applying for residency. The new legislation would lengthen that time, requiring residents to be physically present in the country for four out of six years. Canada has 320,000 backlogged applications, and some landed immigrants are frustrated with the increasingly long wait times.

In 2010, after he had waited the requisite three years, Mohammad Abutaleb was allowed to apply for citizenship. He was told the reviewing process would take 12 months. 40 months later he is still waiting.

“I’m disappointed,” said Mohammad Abutaleb, “I’ve been here for seven years and I don’t want to wait even longer.”

Abutaleb is Jordanian, and first came to Canada as an international student in 1997.  He returned as a landed immigrant in 2007. He is married to a Canadian and has two young children who were born here.

“I’ve lived in Canada for 14 years, almost half my life,” he said. “I love Canada like nobody else and I’m very loyal to it, but it hurts.”

In an email interview, Sylvie Tremblay, a spokesperson for the Ministry of Citizenship and Immigration, said that requirements are being extended because residency is not clearly defined in the Citizenship Act.

“As a result, it is possible under the current act for someone who has spent little time actually in Canada to be granted citizenship. A longer residence period may enable newcomers to develop a stronger connection to Canada.”

There is no clear definition of residency in the current act, which can create confusion for immigrants who want to apply. Under the reforms, it will be clearly stated that applicants must have been physically present in the country for 1,460 days in a six-year period. Chantal Desloges, an immigration lawyer who specializes in Canadian citizenship, immigration and refugee law said the clarification will make the application process much easier for immigrants, but she points out some negative impacts as well.

“Restricting the mobility of people can be negative not only for that individual, but for business as well,” said Desloges.“If I need an employee who can travel, and I hire someone who can’t…well that’s going to affect my business.”

This is a problem that Abutale knows all too well. He has applied to many Canadian companies, however, he can’t take a job that requires travel.

“I’m a civil engineer,” he said. “A civil engineer goes wherever there is a construction project. I fulfill all the requirements, but I can’t travel for business.”

The current punishment for citizenship fraud is a fine of up to $1,000 and one year in prison. The new reform will see the fine surge to $100,000 and/or five years in prison.

Desloges said that many innocent people end up being investigated for fraud, which she said clogs the system and prolongs wait times.

“A lot of people blame the government for this, but if you ask me, the blame sits squarely on the people who commit the fraud.”

One of the more controversial reforms included in the legislation would give the government the power to strip citizenship from dual nationals if they’re convicted of terrorism, treason, or spying abroad.

“Members of the Canadian Armed Forces risk their lives to defend it. Therefore, it makes sense that those who attack our Canadian Forces should not themselves have Canadian citizenship,” said Tremblay.

The reform has been criticized for creating two tiers of citizenship.

“It raises all kinds of constitutional and individual rights issues,” said Desloges. “If I commit a terrorist act, I can never have my citizenship revoked. By virtue of simply being born in another country, they can have their citizenship stripped. And a two tier system is dangerous.”

Under the current act, applicants between the ages of 18-54 have to take a test to ensure that they meet language requirements. Under the new provisions, the range would be expanded to those aged 14-64.

These provisions are not retroactive, and will not apply to anyone who has already applied for citizenship, or who applies before the bill comes  into force.