Love during wartime at the Archives of Ontario 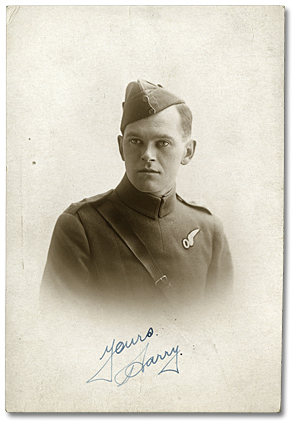 Young lovers, oceans between them, a gripping correspondence and a life lost in battle.

All of this is on offer at the Archives of Ontario in a new exhibit, announced Valentine’s Day, entitled Dear Sadie: love, lives and remembrance form Ontario’s First World War.

Sadie Arbuckle was a Toronto office worker, who lived above her father’s Queen Street shoe store.

Boden says the collection, two boxes worth, was donated to the Archives by an ancestor of Arbuckle in the early seventies.

“Archives hold records of personal lives,” said Boden. “So we can really see first person perspective of things that we’re used to reading about in broad overviews.”

“Harry I don’t understand myself since you left,” writes Arbuckle in the spring of 1916.

Lieut. Harry Mason had just left Arbuckle for the last time, slated to be shipped-out to the frontlines in France.

“I wonder if I shall ever see your dear dear face again,” replies Mason. “[P]lease Dear don’t love me, don’t please Sadie, not now.”

This year will mark the hundredth anniversary of Canada’s involvement in the first “great war.”

Early on in his service, Lieut. Mason served with the 67th Battalion, “the Western Scots,” digging trenches. He later joined the Royal Flying Corps as a gunner, Jan. 4, 1917. He writes, sometimes optimistically, sometimes graphically; all the while he is trying to describe his horrific experiences, without disturbing his “Sweetheart.”

“I finished this letter last night, but the rest of it was too awful to send so I tore it up.”

“Harry was writing to Sadie about what he was experiencing, but he didn’t want her to have to go through the horrors of war,” Boden said.

Arbuckle writes about Toronto during wartime, about fundraising drives and enlistment, the information reaching the home front, and the role of women during the war.

“I wonder how many times I have wished I were a boy,” writes Arbuckle. “I would just love to be going as a soldier & if I had been a boy (worse luck I’m not) I surely would have been one of some kind. A girl has to wait for results, where a boy can go and see them. Suppose you are shocked at me by now.”

“Sadie trying to tell the story of regular life really told us a lot about what people in Ontario were going through at the time,” said Boden.

The correspondence begins before the war, Oct. 28, 1913 and terminates with Mason’s last letter from the front, April 22, 1917. Another letter in the collection from Mason’s brother informs Arbuckle of Harry’s death, April 28, 1917.

“Harry often spoke of you and we thought you should know of his death,” writes Mason’s brother. “We all feel this loss very keenly and knowing that you were very dear to Harry wish you to accept our deepest sympathies.”

Tragically, Arbuckle did not receive this May 5 letter before she sent her last to Mason, asking if she can help, if he needs new socks.

“What’s really exciting about the collection is that it’s very complete,” said Boden. “Sadie obviously kept all of Harry’s letters, herself. But the Mason family got back all of Harry’s effects when he died, and so they must have given all of the letters that Sadie had sent back to Sadie. And so she had the complete correspondence, both sides of it, which is pretty rare in an archival collection.”

The exhibit is available online, and in person at the Archives of Ontario, in Toronto. There will also be a travelling exhibit beginning in June and culminating back at the Archives this fall.

Dates and locations will be available on the Archives website, and @ArchivesOntario will be tweeting WW1 content throughout the year.