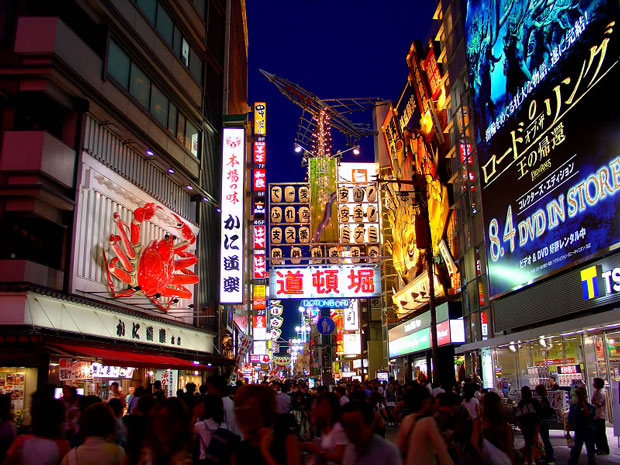 Japan has joined a world-wide trend in offering free Wi-Fi in one of its major cities.

Osaka, on Japan’s main island of Honshu, launched free Wi-Fi access across the city on Jan. 29.

The system consists of two versions, Free Wi-Fi and Free Wi-Fi Lite. The regular version gives users Wi-Fi access in 30 minute sessions, with the ability to reconnect as many times as they wish.

Free Wi-Fi Lite only allows users to connect for 15 minutes, and they are limited to reconnecting only four times a day.

The development is a huge deal for Osakans and tourists, considering in a recent survey from the Japan Tourism Agency  the lack of free Wi-Fi hot spots in the country was the number one complaint.

The  new Wi-Fi accessibility is primarily aimed towards tourists. The service is currently available through several Osaka railways, tourist facilities as well as popular hotels and restaurants.

Below is a map of cities throughout the world that already provide free internet access in public areas on some level.

Free Internet access over a widespread area incurs a cost to operate. In many instances the services are sponsored by companies or run by a local government.

In Windsor, Ont., the Downtown Business Improvement Association runs the free Wi-Fi service that covers an eight block radius of their downtown core.

Debi Croucher, the acting director for the downtown Windsor BIA, told Humber News the service has been a part of downtown Windsor since 2008 when the BIA’s development and infrastructure boards wanted to emulate a similar program in Michigan.

Pairing up with their local service providers, the BIA set out to bring free Wi-FI service to the people of Windsor, said Croucher.

“They wanted to do something for the people,” said Croucher.

Croucher said the service works by using several focal points in the area with internet connections that then rely on antennas to carry the Internet signal.

Although it only covers around eight blocks they already have about 6,000 users daily, and the BIA has plans to upgrade their system and expand their coverage within the year to include the area around the University of Windsor campus.

“As is with any free WiFi network, it was limitations,” said Croucher. “We have bandwidth restrictions.”

But the people of Windsor are very fond of their free WiFi. Croucher said especially in the summer and spring their downtown area is flooded with people using the service. “We hear a lot of feedback when it goes down,” said Croucher. “People love it.”

Croucher also said she would encourage other municipalities to implement the program. “It really has helped us make downtown a better area for locals and tourists,” said Croucher.

Currently Croucher estimated the monthly operating costs of the WiFi service to be around $1,200 to $1,250.

The challenge to bring free WiFi access  to Toronto has been going on for a while. Only recently, in December 2013, the Toronto Transit Commission implemented free Internet access in its St. George and Yonge and Bloor subway stations.

The development came through a partnership with BAI Canada, a wireless communications company. The contract with BAI Canada will net the TTC $25-million over 20 years as the company installs and operates the service.

Ken Ranger of BAI Canada said in a December TTC press release that after the program’s soft launch that they were looking forward to the next phase of the developments. BAI Canada is expanding the reach of the WiFi and cellular infrastructure to the entirety of the TTC system, with emphasis on the lower loop being completed by the 2015 Toronto Pan-Am Games.

Brad Ross, the TTC’s Executive Director of Corporate Communications told Humber News the plan to bring WiFi and cell phone services to the TTC has been talked about for a number of years, but there were several commercial concerns they had to address before being able to proceed.

“It takes time to do these kind of things,” said Ross. “It’s not as simple as putting a tower on top of a building – you have to build the infrastructure around it.”

Ross said the testing at Yonge and Bloor, and St. George Stations is going well and receiving a lot of positive customer feedback. He also said the formal testing will be done soon and the expansion to other stations can begin.