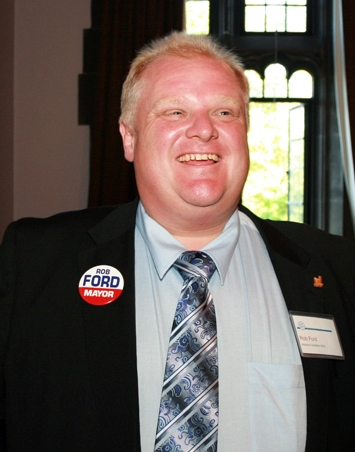 A prominent conservative fundraiser distanced himself from a published report Thursday about his fundraising efforts for Rob Ford’s 2014 mayoral campaign.

Ralph Lean, a lawyer at Gowlings law firm in Toronto, has been a key fundraiser in 11 of the last 12 mayoral campaigns in the city, supporting nine successful candidates.

The Toronto Star reported on Thursday that Lean had previously promised to raise money for Ford’s second mayoral campaign, a claim Lean denied to Humber News in an interview Thursday.

“I never said I was fundraising for Rob Ford,” Lean told Humber News.

“In the last campaign I chaired fundraising for George Smitherman. I’ve never been a fundraiser for Rob Ford,” he said.

“I recently changed law firms, and my number one priority is my clients. I got asked by Stephen LeDrew at CP24 to be a commentator on the mayoral election, which required me to be neutral. It had nothing to do with deserting Rob Ford.”

Lean was surprised that his decision even warranted a headline in the Star.

“I’m one guy here,” Lean said. “I’m surprised I’m even news! I decided to not fund raise because I just haven’t got the time. It has nothing to do with leaving Ford.”

Although Lean insists this news isn’t news at all, observers say there may be more to the decision. City hall blogger Matt Elliott, who writes for Metro newspaper, said Lean’s decision may be a result of the constant scandals Ford has landed himself in.

“Lean’s official line is he’s taken a position with CP24 analyzing the election and so he has to remain objective,” Elliott said. “But I think there’s reason to speculate that the scandals had a lot to do with it. He’s a Bay street guy, and Bay street does not need a mayor with the long, long, long list of scandals Rob Ford has accumulated over the last three years.”

Lean’s decision to back out of Ford’s team is not the only unusual thing about Ford’s campaign so far. Although he was the first in line as an official candidate on Jan. 2, he has yet to create a full website.

“Ford’s biggest liability right now is he doesn’t really have a campaign in the traditional sense,” Elliott said. “He’s got his brother Doug as his campaign manager, but nobody else has been announced as working for the campaign. Now we’re hearing one of the biggest fundraisers in the city for conservative candidates isn’t going to be fundraising for Ford. So he has nobody working on his campaign aside from his brother, and he has no money. That’s not a great recipe for electoral success.”

John Tory, who has emerged as one of Ford’s most serious contenders, joined the race Monday, and already has a website with video, key campaign points, and links for volunteers and those who wish to donate to the campaign.

“It’s very odd for an incumbent not to have any of the hallmarks of a campaign,” Elliott said. “A guy like John Tory comes in, he immediately has a website, lots of people working for him, and a roster of volunteers ready to go. It’s not a good sign for Ford.”