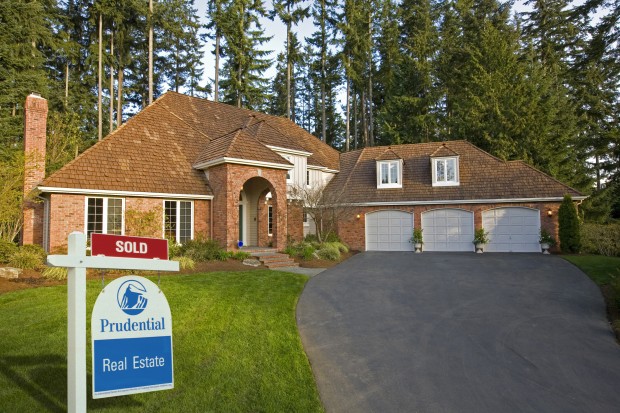 House for sale in Canada. Courtesy of CanadianBudgetBinder.com.

An economic jolt similar to a stock market crash could cause prices to tumble.

“The whole fear is, basically, what we’re forecasting is the fact that mortgage rates are going to go up,” Bell financial analyst Tom Strk told Humber News.

TD Bank said in a new report that prices across Canada could fall as much as 25 per cent. An assessment released this week by the International Monetary Fund said Canada’s real estate market is 10 per cent overpriced.

This week’s forecasts are in tune with previous estimates. Among 20 developed countries, the Deutsche Bank reported Canada as being most overvalued. Deutsche Bank said in December that the real estate market in this country was inflated by 60 per cent.

In yet another report, the Organization for Economic Co-operation and Development reported in June that Canada’s housing market was 30 per cent overvalued.

“Everything revolves around the mortgage rate right now, “ Strk said. “At specific interest rates, the market is overvalued.”

This news is especially troubling for young Canadians looking to purchase their first home.

“We just got a condo and we thought we got a great deal,” said Karol Dybalski, who in December purchased a property near Square One in Mississauga.

“To know that if we renovate it and we put all this time into it and a few years down the road it’ll be wasted time and wasted money because the value of houses is going down, it is a bit worrisome.”

The housing market is already an alarming prospect for young people, he said.

“It’s really shocking to see how expensive it is for 800 square feet,” Dybalski said, admitting that he bought his place before hearing that properties were overpriced.

“There’s such a high supply of buyers because it’s really cheap to get a mortgage,” Strk said. “That drives up the price of properties. Since interest payments are so low, more people can afford to buy property.”

Canadian interest rates are holding at one per cent. Mortgage rates are directly tied to the Bank of Canada rates. This means borrowing money is very cheap right now.

“You could basically get a mortgage for as cheap as you possibly ever could in Canada’s history,” Strk said.

“The whole fear is, basically, what we’re forecasting is the fact that mortgage rates are going to go up,” he said.

Strk said this is especially problematic for first-time home buyers. “It would be a lot more difficult for someone younger to get into a new house for the first time because they simply wouldn’t be able to afford a mortgage,” he said.

“Prices will probably go down, that’s fair, but interest payments will sky-rocket.”

Too much demand in the market

Strk said the current glut of buyers is expected to decrease if interest rates increase. “For new home owners, it kicks them out of the market. It’s pretty much impossible for them to own a property.”

“There is a lot of speculation around the fact that there is a [housing] bubble in Canada,” Bell financial analyst Joseph Kraljevic told Humber News.

For prospective owners like Daryl Bolletta, the best option is to save up and wait for a market correction. “As young people, we’re not going to be able to buy a house for a long time.”

The Canadian Real Estate Association said the real estate market increased its average price by almost 10 per cent in the past year. Currently, the average price for a house in Canada is $391,085.

The Canada Mortgage and Housing Corporation said on Thursday the country’s real estate market is slowing down from record market highs experienced in 2012.

The CMHC forecasts a slowdown in housing starts for the next two years in contrast to record highs from two years ago.