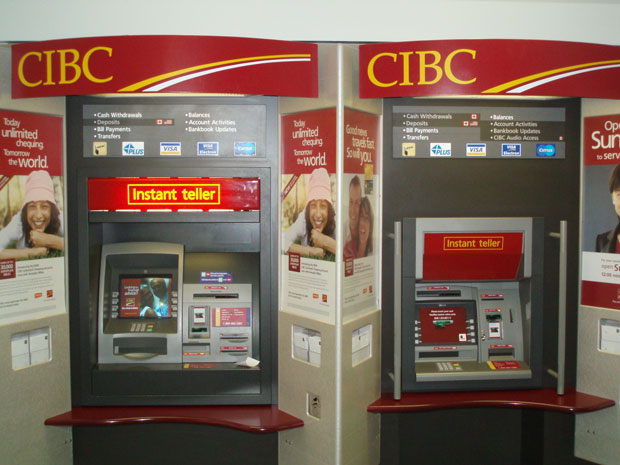 Canadians may soon be paying less per transaction at ATMS if an NDP motion is adopted. Courtesy Wikimedia Commons

By Joshua Sherman and Alexis MacDonald

The NDP has put forward a motion to cap bank machine fees, but critics are concerned about the impact this might have.

The opposition has introduced the proposal in an attempt to make life more affordable for Canadians.

“No one should have to pay $2 or $3 to withdraw their own money from a bank machine – especially when it costs the banks around 36 cents to complete the transaction,” said Glenn Thibeault, NDP Consumer Affairs Critic, in a news release.

The NDP proposal would cap ATM withdrawal fees at 50 cents per transaction.

Although this may benefit frequent ATM users, Howard Leaman, accounting professor at University of Guelph Humber, said it could also negatively affect them.

“If they (banks) are restricted on how much they can make on a transaction, they’ll be less willing to provide that service,” Leaman said.

The Canadian Convenience Store Association expressed worries that a fee limit could result in banks taking ATMs out of stores.

Alex Scholten, the association’s president, said ATMs draw customers to convenience stores and without them, retailers could see their bottom line affected.

“If banks decide to pull (ATMs) because it’s not as profitable for them, it certainly has” an impact on retailers, he said.

“Last year, the (convenience store) industry actually lost money as a whole,” he said, noting convenience stores operate on small profit margins, emphasizing the importance of anything that attracts customers.

“Anything you do that has an impact on those margins will put retailers over the edge,” he said.

Leaman said the price of running and maintaining ATMs may reflect how much they currently charge for transactions.

“You’ve got to buy the machine, install it, service it, keep the software updated, make sure its got cash, so there’s big expenses around running an ABM network,” she said.

Drew-Lytle also said the motion, if passed, wouldn’t apply to all ATMs. Out of about 60,000 machines in the country, approximately 18,000 are owned by banks, she noted.

“Any kind of price regulation that’s done at a federal level would only impact banks, but it would have no impact on the independent operators or credit unions, because they’re provincially regulated,” she said.

The market should determine how high bank machine fees are, rather than government regulation, said Drew-Lytle.

Leaman added he doesn’t believe the motion will go through because the opposition is proposing it.

Pierre-Pascal Gendron, a Humber College business professor and coordinator, said if the motion does pass, consumers would end up paying in other ways.

“If banks face a price ceiling in one area, they will presumably recoup the fee in other ways, and banks have a lot of different tools to do this,” Gendron said.

Gendron cited increased loan interest rates and annual banking fees as some possible methods banks could use to make up for lost revenue from ATMs.

A representative from the office of the PC minister of finance responded to the move by saying, “Through our national consumer agency, we’ve made it easier than ever for Canadians to shop around for low-to-no-cost banking options and to compare costs – including for ATMs.”

The motion is being debated in Ottawa today.

Humber News hit the halls of North campus to get reaction to the NDP proposal to limit ATM fees.