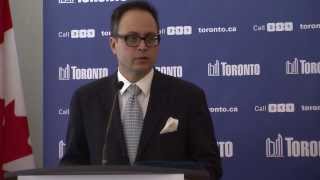 By Alexis MacDonald and Hugh Smith

The city of Toronto is hoping to reduce rush hour traffic with increased parking fines.

City councillor Denzil Minnan-Wong held a press conference in the member’s lounge at City Hall on Tuesday to announce the changes.

Humber News reporter Hugh Smith was there for the announcement and has more on this story.