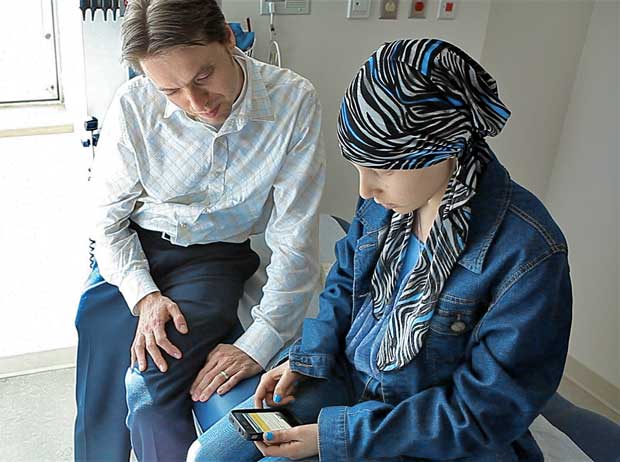 A patient learns how to use the Pain Squad app. SICK KIDS

Children with cancer will be able to manage their pain with a new app gaining international recognition.

The app, developed by Toronto scientist Dr. Jennifer Stinson, has won an award from the Worldwide Marketing Agencies Association

Pain Squad is an interactive app that allows children to easily record their pain.

Stinson, a scientist at Sick Kids hospital, said helping kids with cancer manage their pain can be a challenge.

“Pain is one of the most common and distressing symptoms for children with cancer,” said Stinson. “When kids come into the hospital, they don’t want to talk about their pain. It can be difficult for them to find the words to express their pain.”

In order to overcome this challenge, Stinson developed Pain Squad,  an interactive game which invites kids to become members of the Pain Squad, and complete a pain reporting mission.

Using smartphones, kids are able to easily record the level of pain they are in, and where on their body they are experiencing pain. This information is sent to doctors, use can then determine the best method of care.

When patients consistently use the app, they are rewarded by being promoted in the Pain Squad to ranks such as detective, sergeant, and lieutenant. When they are promoted, they receive encouraging video messages from actors playing members of the Pain Squad.

“Hey Rookie, welcome to Pain Squad,” one of the actors says to new recruits. “We need all the help we can get to put pain in its place.”

Stinson said collecting this information is essential to providing effective care for patients.

“It gives us a better picture of what is causing the pain, and how it’s impacting the child’s life. It helps them feel more in control, and develops awareness about their pain.”

Communications company Cundari partnered with the Sick Kids team to help with the creative elements of the app. Cundari also created a video that explains how the Pain Squad app works.

“The video has been very powerful,” said Stinson. “It’s helped increase the popularity of the app.”

The Pain Squad campaign was awarded the “Best of the Best” award from the Worldwide Marketing Agencies Association. Judges reviewed more than 300 campaigns from 25 countries, including  the U.S., Russia, Brazil. Cundari and Sick Kids were also awarded in the categories of trial and awareness, and experiential marketing.

The team behind Pain Squad hope to have their app available on the app store by April.