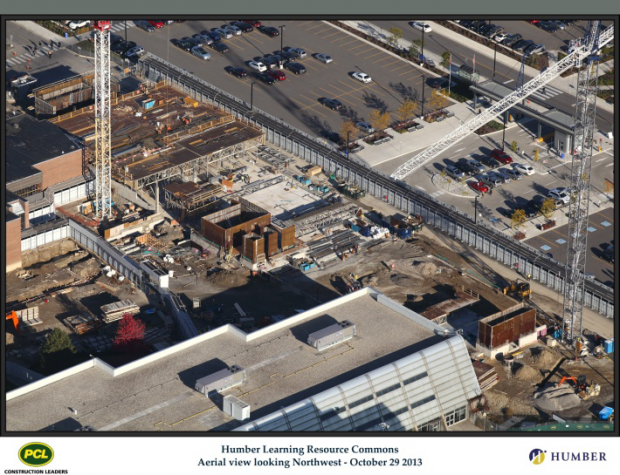 The safety of students and faculty is a high priority for Humber College during the new Learning Resource Common’s ongoing construction at the North campus, college officials have told Humber News.

General questions about construction safety across the GTA came after Chris Crawford, 33, was killed Monday by debris when one area of the construction site at Sheridan Centre mall in Mississauga collapsed.

PCL Construction is the contractor at both the Sheridan Centre site and the Humber site. And officials at the college say safety is being addressed.

Scott Valens, associate director of planning and construction at Humber, said that PCL has onsite safety personnel constantly monitoring the fenced area around the entire site to ensure that all gates are locked, holes in the fence are fixed, and lighting inside the walkway is maintained.

“It’s not only about making sure the site is safe for students and staff and their own construction personnel, but they’re responsible for their own insurers and their own financial backing to make sure that it’s kept up to date,” he said.

Andrew Leopold, marketing and communications associate director at Humber, said in the event of an incident at the learning commons site, Humber College would work with PCL Construction to implement each parties emergency procedures.

“Both parties are up to date with what each other is doing,” Leopold said. “It’s been a great relationship so far and I’m looking forward to the arrival of the building in the opening of September 2015.”

“Anything that happens inside the fencing that encases the construction is the responsibility of the contractor,” said Robert Kilfoyle, director of Public Safety and Emergency Management at Humber.

He added the area surrounding the fencing is the responsibility of Humber College and the college’s public safety department. The department looks after traffic control and makes sure that the construction company complies with the school’s fire code regulation.

“The walkways, the emergency exits, those sorts of things aren’t obstructed and people can get out of the building,” said Kilfoyle.