Ontario Open For Business in Brazil 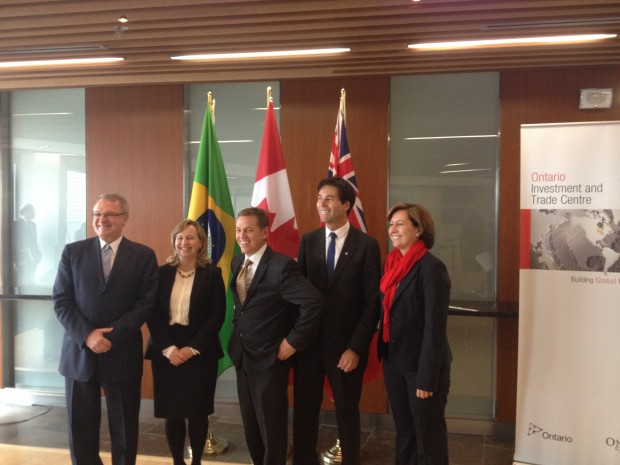 By Yasmin Neale and Glyn Bowerman

“The more we can get trading and doing business overseas the more that’s going to create jobs here in Ontario,” said Hoskins.

Currently, Hoskins said, only about seven per cent of Ontario businesses export outside of Canada.

“Ontario has a great competitive advantage,” said Hoskins. “We’ve got a low corporate tax rate, we have one of the best – if not the best – talented workforces in the world, we’ve got a great quality of life, we’re close to the U.S. market as well, so there are a lot of market opportunities. So it makes sense for Brazilian companies to come here as well.”

Going from sector to sector, Hoskins said Ontario has a lot to offer Brazil – currently the sixth largest economy in the world – in areas like infrastructure, high tech, financial services, food processing, and engineering. Hoskins said these are all areas where Brazil is strong, investing and looking for partnerships.

The Sao Paulo office will make 11 Ontario IMCs across the globe, looking to increase foreign investment in the province and help grow its exports, as part of the Liberal government’s Going Global Trade Strategy.

Toronto city councillor Ana Bailao was also at the announcement. Her ward 18 constituency includes Little Portugal, and has a large Brazilian population. She says the announcement is exciting on two fronts: for the community she represents, and the province as a whole.

Bailao named Toronto’s film industry as a key area for growth and cooperation between Toronto and Brazil.

“One of the challenges that they’re facing in Brazil, for example, is that there was legislation that was passed to have 30 per cent local content and they’re having a bit of a hard time doing all the production. So we can definitely help in that and it will be a great opportunity for our companies as well.”

As well, Bailao said the Toronto International Film Festival, for example and the Festival do Rio in Brazil have already initiated a knowledge exchange.

According to provincial data, since the aftermath of the economic collapse in 2008, Brazilian imports to the province have steadily increased, while exports to the country have remained relatively stable.

Hoskins will officially open the Sao Paulo office during a trade mission to Brazil, next week.