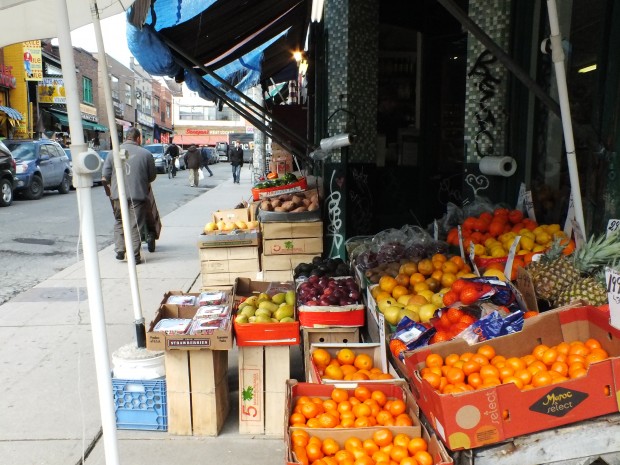 Photo by Alex Coop
A food market in Kensington Market located in Toronto.

A new tenant is moving into the condominium tower at College Street and Spadina Avenue, and its name is Loblaws.

Despite the petition No Loblaws No on change.org, and some outcry om the community against the store, Loblaws will soon call a 1,900 square meters space in the condo building owned by Tribute Communities.

The Toronto Star reports that, “the Kensington location will be much smaller than other Loblaws, at only 1,900 square meters.” By comparison, the Loblaws at the former Maple Leaf Gardens is approximately 7,900 square meters.

Talk of the grocery store opening in Kensington dates back to late 2012, when the bustling market was hit with rumours surrounding a corporate presence emerging in the community.

The petition was started by Friends of Kensington Market back in 2012. They’re asking for 7,500 signatures to oppose the opening to maintain the small business atmosphere in the area.

Friends of Kensington described small independent businesses in Kensington Market as being the backbone of the market, and added small businesses may not withstand competition of a Loblaws.

Mika Bareket is the owner of Good Egg, a food and kitchenware store in the area, and a member of Kensington’s Business Improvement Area.

Bareket grew up in the area and has seen many retailers and big companies like Starbucks try to move in.

“We have always been missing a frozen foods and packaged foods section to the market,” said Bareket, who often cooks as well. “I have mixed feelings about Loblaws, but there are bigger issues than Loblaws, like construction around the area.”

Although Bareket is not sure on how she feels towards the grocery opening a store in the market, she’s thankful it’s Loblaws.

“I’m quite pleased that it’s Loblaws, a distinctively Canadian company,” Bareket said. “They’ve done their research and found where they can have a good spot for their market.”

Another veteran resident is Marion Kane, a former food writer for the Toronto Star, has been a Kensington community member since 1978.

“I am not against Loblaws opening, I think it’s an asset,” she said. “This area is unique and it’ll always be different.”

As a food writer, Kane said she often looks to the local stores for groceries, but there are certain items that are missing that Loblaws can provide to Kensington. She also said that the community has been through much worse than the opening of a corporate grocery store, and many residents will end up benefiting from Loblaws.

“The market has gone through rough times, drug problems and such, but you can’t kill the spirit of Kensington,” she said. “Kensington will adapt to whatever’s happening, and Loblaws is a sign of that.”

While there is no exact date of when Loblaws will open, it will be some time in 2016.