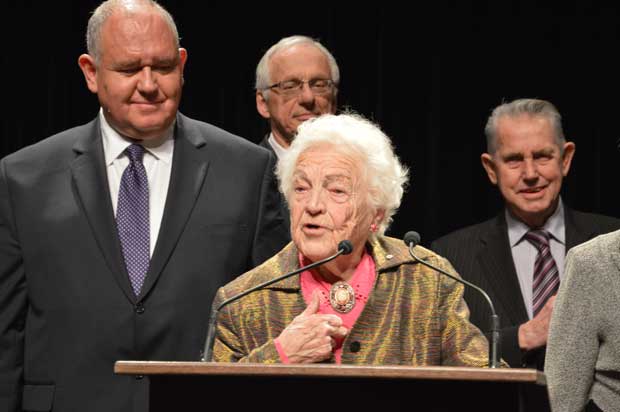 By Hermione Wilson and George Halim

It appears that not all municipalities who applied for ice storm relief will qualify for funding.

Municipal Affairs and Housing Minister Linda Jeffrey said eligibility will be based on the financial status of each municipality and how much damages they sustained. Jeffrey said the total amount of  funding the GTA can expect from the government has yet to be determined.

“Climate change has caused these events to be more frequent,” said Jeffrey. “Some communities have been hit twice . . . and they are concerned about what kinds of costs they will incur on an ongoing basis should this type of change continue.”

Mayor Hazel McCallion invited Jeffrey to a meeting of the GTA mayors in Mississauga. McCallion said that all the mayors came together to put forward a joint request for funding and they have given the government until March 1, 2014 to give them an answer.

“We want the citizens of our communities to know that we are working together,” said McCallion. “I had a call from the Premier that they are anxiously awaiting the results of this meeting today,” she added.

Jointly representing Toronto alongside Mayor Rob Ford was Deputy Mayor Norm Kelly, who was positive about the outcome of the meeting.

“What this was was an attempt collectively to establish a series of requests,” said Kelly, adding that Jeffrey left the meeting before those requests were finalized.  “Now they will be put . . . in front of [Minister Jeffrey] and through her the Ministry [of Municipal Affairs],” said Kelly.

When asked if the Premier should have been at the meeting, Mayor Rob Ford said “absolutely”.

“This affected over seven million people and I think this is more important than a byelection right now,” said Ford, referring to the Thornhill and Niagara Falls byelections Premier Kathleen Wynne called on Wednesday.

Mayor McCallion disagreed, saying she didn’t invite the Premier because the municipalities had “homework” to do first.

“Before we can approach somebody we had to know what we wanted, and we need a meeting to determine that,” said McCallion.