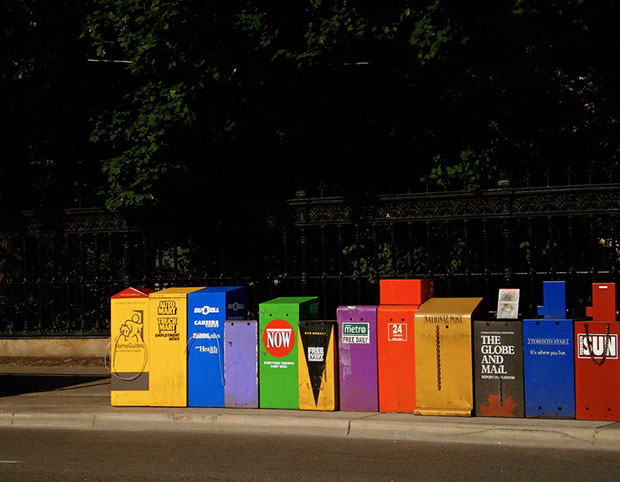 The media landscape is rife with competition
photo by Jason Michael

Reaction continued Tuesday to news that two of Canada’s largest paper companies have been hit with job cuts.

The Globe and Mail and the Postmedia-owned National Post announced job cuts on Monday. A total of 18 positions are planned to be axed at the Globe, including nine editorial jobs. The Post says it’s cutting seven newsroom positions.

The layoffs at both papers come after recent job cuts at Canadian media outlets like Sun Media and the Kamloops Daily News.

I am now @nationalpost‘s former social media editor. Laid off this afternoon with a few others.

Want to read something stirring? @bruce_arthur tweets thanks to @jhabray, editor laid off at @nationalpost. Man, newsrooms can change lives.

The announcements come in the wake of last week’s Postmedia report, which indicated a loss of $11.8 million partly associated with cost-reduction strategies. While not publicly releasing their revenue reports, the Globe admits to declining revenues.

Rob Lamberti, a teacher in Humber’s Journalism program and former crime reporter for the Toronto Sun, described the situation for newspapers as somewhat strange, even with the popularity of online news.

“The web as a money maker for newspapers is a bust right now,” he said. “Paper is still bringing in the money, but the future is anything but paper.”

Hugo Rodrigues, the president of the Canadian Association of Journalists, said these are tough times for journalists. He speaks from not only his position as president of the CAJ, but personally, having lost his own job in the midst of the Sun Media cuts in December after ten years of work.

The cuts cast a shadow over students looking to enter the field.

“It’s easy to get discouraged when it seems like every week there’s another announcement or another decision that is taking jobs away from both working journalists and people who are being involved in student media,” he said, noting that people want to have “a job that will pay the rent and put food on the table.”

Competition is fierce in the media landscape, but Rodrigues assures there are still jobs out there and that recent and soon-to-be graduates shouldn’t despair.

“People going through a formal journalism education now have an advantage over even someone like me,” he said.

“I’ve been in the biz for ten years. I’m not a digital native. Though I’m comfortable with social media, live blogging, and all that kind of stuff, I’ve had to learn those in my job, whereas many students who are in journalism programs right now have those skills.”

Journalism schools are playing to this shift in media by teaching students to be the ‘one-person newsroom.’

“It’s no longer anywhere near acceptable to train learners to be experts in one facet of media work,” explained Mike Karapita, program coordinator for Humber’s journalism program. “Our students are doing well with their job searches after graduation because they are able to tell stories and communicate in all kinds of ways for today’s media environment.”

Lamberti said there will always be a need for journalists, but it’s just a matter of where the skills are applied. Whether for a corporate newsletter or a small town paper, writers and storytellers will always be in demand.

Tips for those looking to enter the industry include being flexible, having a plan to move forward, content marketing, and having realistic expectations.

@KaitRhea At this moment, nothing beyond “Good luck.”