Ford gets stuck on the campaign trail 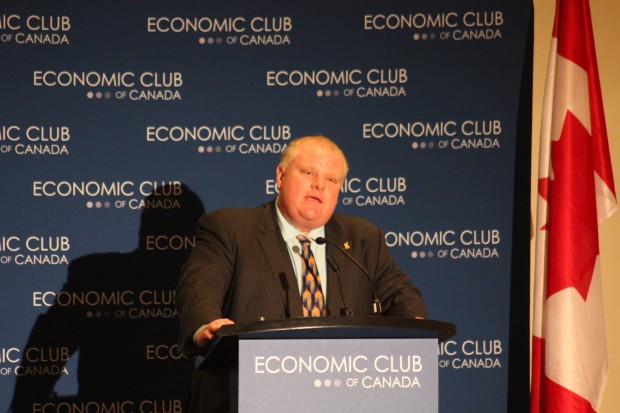 Mayor Rob Ford got stuck en route to the first major stop on his re-election campaign, before delivering a speech to the Economic Club of Canada.

“I was in an elevator for 45 minutes,” Ford told reporters, before entering Hilton hotel dining room.

He gave his speech an hour later than scheduled, before an assembled crowd from the business community.

“Do you want subways?” Ford asked the assembled. “Or do you want streetcars? Or, should I say ‘fancy streetcars,’ LRTs. That’s for you to decide.”

“To some of you, this might seem ambitious, but I know it can be done,” Ford said. “Because they said ‘you could not build the Scarborough subway,’ and I got it done. I’ve finally proven that we could bring all three levels of government together to build subways in Toronto. All we need now, all we need now is the political will to make this vision a reality.”

A block away, Ford’s mayoral rival David Soknacki re-confirmed his earlier promise to scrap the Scarborough subway plan, and return to the previous, fully funded LRT.

Either way, an environmental assessment must be done before subway construction can begin.

Ford next spoke about the upcoming debate on the 2014 budget, before city council next week.

“The reality is, folks, it hasn’t been long since council undemocratically took many of my [mayoral] powers, and councillors are already going back to their old ways,” Ford said.

He said, if councillors had their way, Toronto taxes could be 3.2 per cent higher – the increase recommended by city staff to top-up the city’s extreme weather reserves.

The city is currently seeking over a million dollars from federal and provincial governments to help pay for the damage caused by the last ice storm.

Yesterday, Toronto’s executive committee decided, instead, upon a tax increase of 2.23 per cent – 0.5 per cent of which will go towards the Scarborough subway. A number that doesn’t sit well with Ford.

“I’m extremely disappointed that the mentality at city hall has changed to the old ways of tax, tax, tax, and spend, spend, spend.”

Ford said he has motions prepared for next week’s budget battle, which will mean $50 million in savings.

“Ladies and gentleman, on October 27, you must ask yourself one question: who do you trust with your hard-earned tax dollars? My administration’s record, on this front, speaks for itself.”

Unfortunately for Ford, not everyone stuck around for his stump speech. A number of attendees left before the mayor arrived, unable to wait-out the delay.

Rhiannon Traill, president of and CEO of the Economic Club of Canada, later confirmed to reporters Ford was indeed stuck in a service elevator with herself, Ford’s staffers, and Hilton hotel employees.

Reaction to the mayor’s speech from those who stuck it out was mixed.

Jim Regan told reporters he was impressed the mayor was able to address the audience after his elevator ordeal. Regan said he still supports the mayor, in spite of the scandals.

“I think enough is enough,” Regan said. “Elected officials have their own private lives, and I think we should limit our coverage and move on to some of the policy coverage.”

For Dave Fowler, the mayor’s speech, with its emphasis on savings, was nothing new.

“We’ll see if the numbers all add-up,” Fowler said.

Toronto city council will have the final 2014 budget battle, at city hall next week.