Bouchard bows out but scores victory for Canadian tennis 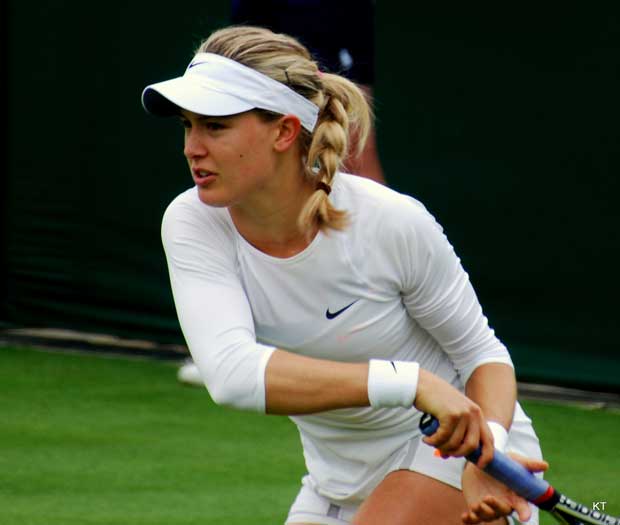 Eugenie Bouchard in action at Wimbledon, in 2013.
Courtesy of Carine06 via Flickr

Eugenie Bouchard’s historic run into the second week of the Australian Open may be over, but observers on Thursday said she’s making big waves in the sport.

Bouchard’s run came to an abrupt end in the semi-finals Thursday afternoon in Melbourne.

Standing between Bouchard and a place in Canadian tennis history as the only player, male or female, to reach the final of a Grand Slam tournament, was the experienced Li Na.

Li was never in danger in this match, the 6-2 6-4 win will fill her with confidence as she prepares for Saturday’s final against an opponent she’s never lost to, Dominika Cibulkova of Slovakia.

“When a lot of young kids see that kind of success on the international stage and when parents see that, it’s encouraging for parents to get their kids involved in the sport, because there is the potential to do well,” said Sarah Grossman, manager of communications and media relations for Tennis Canada.

Li, who turns 32 in February, was looking to reach her fourth Grand Slam final, and third in Australia. She became China’s first major winner with a victory at the 2011 French Open.

Their semi-final contest was more of a one-sided affair than neutrals would have hoped for, but it proved to be a great learning curve for the 19-year old Canadian, who maintained her composure while being thoroughly dominated by the professional and efficient Li.

“I spoke with her briefly at the Rogers Cup when she was 17,” said Raymond Mahadeo, president of the Malton Tennis Club. “She was composed and collected, even then, I could see she was mentally strong.”

Bouchard’s achievements in her young career on the WTA tour, from being named Newcomer of the Year for 2013, to reaching the semi-finals in Australia in only her fourth Grand Slam appearance, is a culmination of years of training and hard work.

Since then, three national junior training programs have been started in Montreal, Toronto and Vancouver, which allow younger players to get the support they need from key coaching staff and focus solely on tennis.

With the emergence of Canadian players capable of reaching the top of the tennis world, the sport’s popularity is increasing in Canada, a country without a particularly rich tennis history.

As Daniel Nestor continues his strong play into his 40s as the most successful doubles player in history with 83 titles, and Vasek Pospisil’s bursting onto the scene, somewhat surprisingly, the future of Canadian tennis seems to be very bright.

Grossman wouldn’t call this Canada’s golden generation though, not even close.

“I think it’s just the beginning of that success… I don’t even think we’ve seen the best out of these players and the players coming through our system now.”