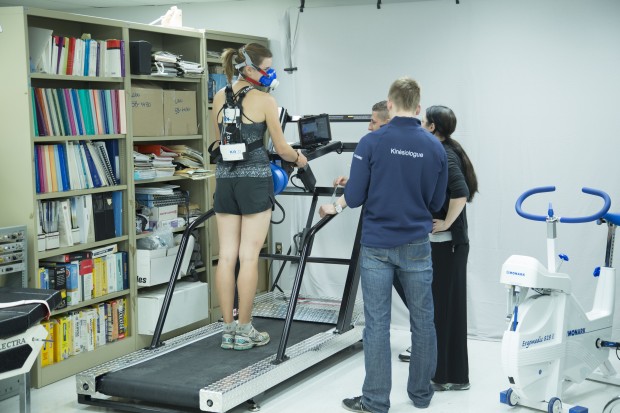 Members of the XPantarctik expedition prepare for an unprecedented 45-day adventure. Courtesy of CSA.

A crew of six Canadian explorers will be leaving Argentina in a few days for the barren lands of Antarctica. All in the name of space exploration.

“The biggest challenge is going to be the weather,” said Emanuelle Dumas, a member of the expedition and adventure tourism guide. “The winds can reach 150 km/h and the temperature will go down to minus 50. The mountains are really steep and we need to carry heavy equipment, so we will be moving very slowly.”

The XPantarctik expedition will serve as a field-testing platform for Astroskin, a prototype “smart shirt” that the Canadian Space Agency (CSA) has taken an interest in.

Carré technologies, the developer of Astroskin, is a Montreal-based company that has been designing smart wearable technology since 2006.

“Astroskin is a garment made for astronauts, designed with wearable sensors,” said Pierre-Alexandre Fournier, CEO of Carré technologies . “The shirt measures cardiac activity, breathing activity and movement, and the hat measures the levels of oxygen in the blood. Combing all of the sensors we can estimate blood pressure.”

The crew will be setting sail from Ushuaïa, Argentina to the Antarctic peninsula for an unprecedented 45-day expedition, after some last minute preparations.

Gathering the information remotely would play a very important role in monitoring the vital signs of the potential astronauts, and will even help develop the technology required to prolong residency in outer space.

Astroskin has all the sensors needed without the astronauts even being aware that they are wearing it, said CSA flight surgeon Raffi Kuyumjian.

Before the Astroskin will be taken to outer space, Dumas said her team, wearing the smart gear, must first boldly go where no man has gone before.

“We want to reach the region of Antarctica where no human has ever set foot before,” she said.

If the Astroskin survives its rigorous testing in the unforgiving conditions of the Antarctic, the CSA would like to see all of their astronauts outfitted with a suit at all times to ensure their safety, as well as to advance their understanding of the human body’s behaviour in zero-gravity.

Kuyumjian, also the CSA’s chief medical officer, said that once this product is perfected it could be put to very positive use back here on terra firma.

“Remote communities for example who don’t have easy access to a doctor, they can wear these shirts all the time and they can trigger alarms if something wrong is happening, and alert the doctors monitoring from a distance.”