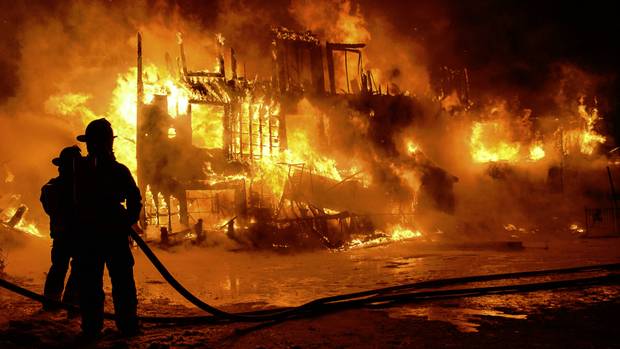 Firefighters try and contain the blaze that destroyed a seniors home on Thursday, Jan. 23, 2014. (Francois Drouin/Infodimanche.com)

The Surete du Quebec confirmed to Humber News on Thursday afternoon that three people died and 30 are missing after a fire ripped through a seniors home in the small eastern Quebec village of L’isle-Verte.

Ginette Caron, deputy mayor of the town said of all the residents in the 52-unit building, only five didn’t need assistance in getting around.

“The rest were semi-autonomous, practically no longer autonomous,” said Caron in a press conference, describing the residents as people using “wheelchairs, walkers, people who can’t move around. People with Alzheimer’s, in the last stages of life.”

In temperatures close to -20C, local firefighters were called at 12:30 a.m. to the Residence du Havre, 230 kilometres east of Quebec City.

Across the street from the scene, Mario Michaud witnessed the tragedy first hand from his home.

Although the death toll remains low at the moment, local officials fear that number will soon increase.

This isn’t the first Quebec nursing home where people have died in fires.

In 1969, the village of Notre-Dame-du-Lac was the site of the largest nursing home fire in Canadian history, claiming 54 lives. The village, now called Temiscouata-sur-le-lac, is 95 kilometres from L’isle-Verte.

Residence du Havre’s website says that an automatic sprinkler system is in place. However, according to the building’s provincial license, only partial sprinkler systems are installed.

Also according to the document, at the time the fire broke out, only one full-time staff member was on duty.

Since 1980 in Ontario, 48 people have died in long-term care facilities without sprinkler systems.

The largest incident occurred that year at an Extendicare nursing home in Mississauga, where 25 residents died.

At the time, Jim Jessop, who is now Deputy Fire Chief of Fire Prevention in London, Ont., was an expert witness at the Orillia inquest for installing sprinklers.

Ontario became the first province to make sprinklers mandatory in places like care homes for seniors and homes for people with disabilities, on May 16, 2013.

“There are different phases for different buildings,” Jessop told Humber News. “Generally, the vast majority of facilities will have sprinkler systems within the next five years.”