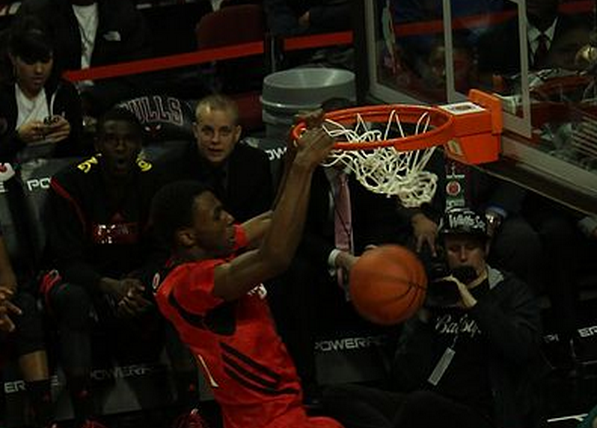 Andrew Wiggins throws down a dunk in the 2013 McDonald’s All-American Game. (Photo courtesy of Wikicommons)

Never has the hype for the start of the NCAA basketball season been so anticipated in Canada.

Wiggins was the number one recruit heading into this season and has been hyped as the anticipated first overall pick in the 2014 NBA draft.

Wiggins chose Kansas University as the school where he will play his (likely one season of) collegiate hoops and TSN followed up by announcing all Kansas games will air on one of their platforms throughout the season.

“Andrew Wiggins is maybe one of the biggest prospects to come play college basketball in the last decade,” said Rustin Dodd, a Kansas basketball writer for the Kansas City Star.

“They (Kansas) had 25 thousand fans try to get in to the first practice, and then the next week ten thousand people came in for an early morning practice on a Saturday,” said Dodd. “Most of it can be attributed to Andrew and his presence.”

Kansas is ranked fifth in the pre-season poll but Dodd said Jayhawks coach Bill Self isn’t getting too carried away.

“He is handling it two ways: on one hand he wants to downplay the hype to take the pressure off his players, on the other hand he is the kind of guy who likes to embrace expectations,” said Dodd.

“If people say you are going to win the national title then you should act like that,” said Dodd. “So [Self] wants to give his team some time to develop and grow but he is the type of guy that likes the challenge.”

Who is the pre-season favourite?

Kansas may have the top recruit but they, and everyone else, will be chasing a school with the greatest tradition in college basketball.

University of Kentucky Coach John Calipari has once again brought in the top recruiting class in the country.

Although he might not have the top recruit in Wiggins, five of the top nine recruits on ESPN’s Top 100 list will suit up for the Wildcats making them the pre-season favourite.

A team made up of top freshman is common in the Bluegrass state as Kentucky has routinely sent several players to the NBA after one season during the John Calipari era. (i.e. John Wall, Eric Bledsoe, Demarcus Cousins, Brandon Knight, Anthony Davis, Michael Kidd-Gilchrist.)

Last year’s squad couldn’t follow up the National Title the 2011-12 team won, not even qualifying for the NCAA tournament, but this year’s team has already created buzz for a possible undefeated season.

“Every season there is a lot of anticipation,” said Jerry Tipton, sportswriter for the Lexington Herald-Leader, noting an undefeated season is unlikely.

“It hasn’t happened since 1976 and as time goes on the catchphrase you hear is parity,” said Tipton. “There is just more and more good teams and players out there so is it likely? No. But John Calipari has said when you shoot for something like that and you fall a bit short you still have done something memorable.”

A dynamic group of freshman, led by 6’9” power forward Julius Randle, will be joined by second year players, Alex Poythress and Willie Cauley-Stein who will look to a play the role Terrence Jones and Doron Lamb did two seasons back.

“They have experience and that has to help but that team a few years ago had a senior, Darius Miller, who became Mr. Clutch that year where there was two or three games where the game was slipping away and he steadied it with a shot or play,” said Tipton.

“We will have to see if someone like that emerges but something like that can be the difference between undefeated and not or winning the whole thing and not.”

While the games in March mean more than in November, Tuesday night both Kansas and Kentucky will shine on centre stage in a pair of games featuring four of the top five teams in college hoops.

The Champions Classic is an annual pair of games where Kentucky, Kansas, Duke and Michigan State face-off on one evening.

Tipton said Tuesday night will give Kentucky a good look at what they have.

“It gives you a real sense of what kind of team you have and what they are capable of, it is not pass fail, win or lose the game and the consequences are enormous, it is another game,” said Tipton.

“Both teams expect to be a lot better in March then they are Tuesday.”

As for Kansas, Dodd said the game means a lot for perception.

“Perception-wise it is important because you have that win banked for the rest of the season,” said Dodd.

“Even if Kansas loses it I don’t think it will be a terrible blow because it is so early and it is something they could probably learn from.”

Kentucky and Kansas won’t meet in the regular season and if both teams’ seasons go according to expectations they likely wouldn’t meet until possibly the Final Four.

One spot they will meet is in the headlines, as all eyes will be on Andrew Wiggins, possibly the best player in the NCAA, and the Kentucky Wildcats, potentially one of the greatest teams ever in the NCAA.