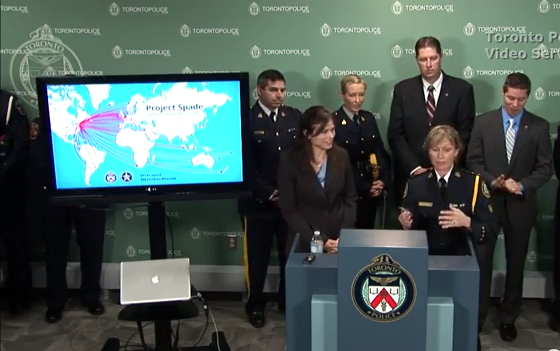 Inspector Joanna Beaven-Desjardins speaks at a news conference Thursday on Project Spade. Local and international law enforcement agents involved in the case stand behind her. (Screengrab via Toronto Police Service)

348 people have been arrested in a three-year world-wide investigation into a child pornography ring allegedly based in Toronto.

Toronto Police announced Thursday morning 50 people had been arrested in Ontario and 58 in the rest of Canada in connection to the case, as well as 76 in the U.S. and 164 internationally.

Way allegedly ran Azov Films, a “naturist” film company that generated $4 million in the six years it was operational, from 2005 to 2011, she said.

When police searched Way’s home and business on May 1, 2011, Beaven-Desjardins said they found “hundreds of thousands of images and videos detailing horrific acts against very young children.”

She said it was “some of the worst that they have ever viewed.”

“This individual was running an exploitation movie production and distribution company from an address within the city of Toronto,” she said.

“This company operated a website . . . where customers from around the world could place orders to have movies sent to them through the mail or through the internet.”

A preliminary inquiry into Way’s case is ongoing, and he remains in police custody.

Toronto Police worked with Interpol, the United States Postal Inspection Service and police forces in 50 countries to track down the alleged producers, distributors, and consumers of Azov Films.

Beaven-Desjardins said 386 children have been freed from sexually abusive and exploitative situations, primarily in Romania and Ukraine, where the majority of the content was allegedly produced.

Azov Films had been named in lawsuits and child pornography cases in other countries prior to the Toronto investigation.

Toronto Police first made contact with Way online, where he was sharing what Beaven-Desjardins called “very graphic images of young children being sexually abused.”

Officers traced his IP address, leading to the May 1, 2011 searches of his home and business.

Police Chief Bill Blair praised the many investigative organizations involved in the operation.

“There is no greater responsibility for those of us who have sworn to serve and protect than the protection of our children,” he said.

“The exploitation of children is a crime for which law enforcement comes together united around the world to protect those individuals who cannot protect themselves.”

76 people have been arrested in the U.S., and 164 internationally, in connection with the case.

Beaven-Desjardins said of particular concern to the investigation were the number of people arrested who had “close contact with children,” including teachers, doctors, and foster parents.

Police on both sides of the border are still looking for Brian Way’s mother, Sandra Waslov.

Beaven-Desjardins said, “she is named in the criminal organization charge” as a co-conspirator.