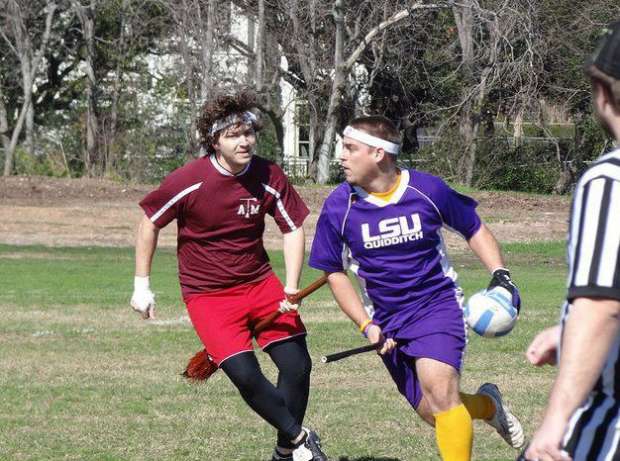 By Rachel Ortego via Wikimedia Commons

Quidditch is no longer a thing of fantasy – ‘Muggles’ worldwide have learned to make their own magic with the once-fictional sport.

On Nov. 9, Toronto plays host to the Quidditch Canadian Cup III. Sixteen of Canada’s top teams compete at Cherry Beach with the top four teams qualifying for the Quidditch World Cup in Myrtle Beach, SC, USA in April 2014. The tournament is hosted by the International Quidditch Association.

Tegan Bridge, Canadian representative for the IQA, told Humber News that, despite only being eight years old, competitive Quidditch has exploded worldwide.

“It’s grown from people hearing from friends that other schools have teams,” said Bridge.

“There are teams in Japan, China, India, Australia – it’s all over the place and it’s mostly passed by word of mouth and people seeing videos on the Internet and thinking ‘gosh, I need this at my school’.”

From IQA’s documentary on Quidditch, a broomstick that players use to “ride” is displayed.

The mechanics of the game are fairly simple.

Each team has seven players on the field at a time. On each team there are three chasers, two beaters, one keeper and one seeker.

The chasers carry a ball called the ‘quaffle’ up and down the field. Their sole intention is to score in one of the opposition’s three ‘hoops’.

The keeper is the Qudditch equivalent of a goalie – keepers protect their team’s three hoops, ensuring the chasers don’t score.

The beaters’ responsibility is to stop the chasers and keeper of the opposing team. In Rowling’s novels, beaters carry bats and hit hard, dangerous balls called ‘bludgers’ at the other players, in an effort to dismount them from their brooms, or make them drop the ‘quaffle’.

In the IQA games, a dodgeball is used, and the beaters throw them at chasers to disrupt the flow of the game. Finally, the seeker has one job – to catch the ‘Golden Snitch’ and, therefore, ending the game. The game doesn’t end until the seeker has caught the ‘snitch’. In the wizarding world, games could go for days on end, at times.

Each goal scored by the chasers is worth 10 points. In the novel, catching the Golden Snitch is worth an additional 150 points, meaning the team that catches the Snitch usually wins the game.

From IQA’s documentary on Quidditch. Three hoops are set up at either end of the pitch for scoring. Chasers must get the “quaffle” through one of these hoops to score 10 points.

IQA’s rules differ slightly – the seeker who catches the Snitch wins 30 points for their team.

In Rowling’s novels, the game is played hundreds of feet in the air with each team member riding flying broomsticks.

In a slight deviation from Rowling’s vision, teams playing in the Canadian Cup have to run clutching broomsticks.

The game was adapted in 2005 at Middlebury College in Vermont, USA by then-freshman Xander Manshel. Being more diverse than traditional sports, it caters to a wide group of people, from Harry Potter fans to seasoned athletes.

“Quidditch is the really strange and interesting combination of athletes and nerds. Which are two stereotypes and groups that don’t actually mix. It is such an interesting and exciting sport that it attracts athletes, but because it has ties to Harry Potter, people who are fans of the books and movies will come out,” said the IQA’s Bridge.

Jessica Donat, President of McMaster University’s Quidditch team, said the popularity of the fringe sport is steadily growing, including turn out for their own team.

“It’s been incredible. This year we had over 60 people come and try-out. We finally have a good 21-person roster,” said Donat.

“Quidditch definitely has a very unique etiquette, compared to other sports. I find that it’s just really great to be around everyone – not only your own team, but other teams because we all there to help each other get better. And of course it’s Quidditch, so it’s a pretty unique sport.”

While universities compete against each other locally, Quidditch leagues have begun to take on a larger scale.