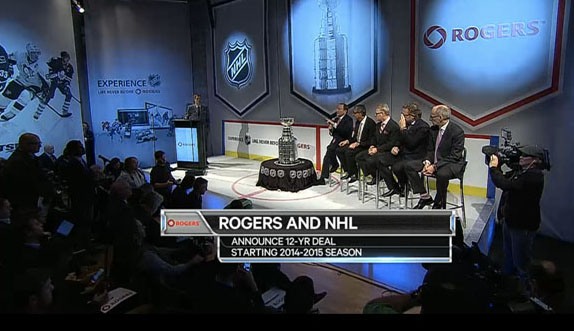 The National Hockey League and Roger Communications announced today they have signed a 12-year multimedia and broadcast deal worth $5.2 billion. This marks the largest media rights deal in NHL history as well as one of the largest in Canadian history.

The details of the agreement involve Rogers receiving all national rights for NHL games to be broadcast on all platforms, in all languages.

In a press conference today in downtown Toronto, Keith Pelley, president of Rogers Media, said “Canadians will have more games, more content, more choice than they’ve ever had before.”

“We’ll focus on storytelling so fans will really get to know the stars of the games. There will be an emphasis on innovation with Rogers. We’ll leverage our first-to-market technology for enhanced production and viewing experiences. We’ll create our own hockey production centre for excellence, to unify our NHL content and it will be everywhere.”

Dr. Dan Mason, a professor at the University of Alberta who specializes in Canadian hockey, told Humber News that fans should be happy with this agreement.

Pelley said fans will still be able to watch hockey Saturday nights on CBC as it will continue to air Hockey Night in Canada, as well as the playoff games. There will also be French language coverage on TVA, a Quebecor Media network.

Hubert Lacroix, CBC/Radio-Canada president and CEO, said the new agreement ensures that CBC carries 320 hours of prime time hockey, including “vigorous season games, playoffs, and the Stanley Cup for the next four years.”

“The NHL, frankly, set very high standards and very high financial expectations for these negotiations and while we thought we brought something very special to broadcasting, CBC was not candidly in a position to spend taxpayers’ money in this game of high stakes.”

In an internal memo, Lacroix said this wasn’t the outcome he had hoped for and confirmed jobs will be cut.

Gary Bettman, NHL commissioner said, it’s not always about the money in a very complicated negotiation.

“We have nothing but good feelings and good will for the people at TSN and it’s always tough to lose a partner. As we looked forward we concluded that for the rights that we had, and the rights that Rogers was seeking, this relationship made the most sense.”

“They should have made it more available to TSN, especially since it’s office is in Toronto, but as long as it stays within Canada I’m happy.”

The NHL board of governors will meet Dec. 9 and 10, where the agreement is subject to approval.