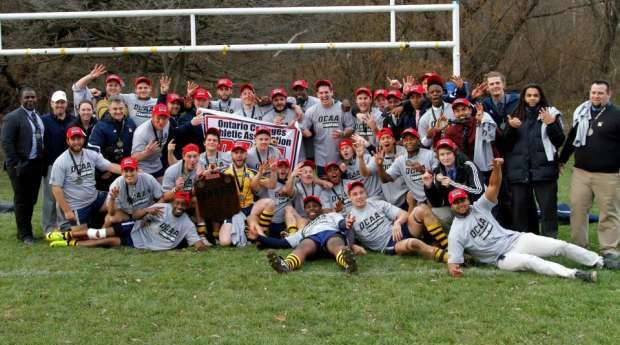 Courtesy: Jess Raymond Photography. The Hawks lined up during the national anthem before the opening whistle.

Courtesy: Jess Raymond Photography. The Hawks and the Thunder lined up for a scrum during the OCAA provincial championship at the Valley Field located at Humber College’s North Campus.

Courtesy: Jess Raymond Photography. Humber now has their name etched on the OCAA Champions plaque for the sixth time in seven years.

Three-peats are hard to come by. But in the mindset of the Humber Hawks men’s rugby team, there’s always more work to do.

On Sunday at Humber College’s Valley Field, the Hawks cemented their status as the powerhouse in Ontario Colleges Athletics Association rugby by defeating the Algonquin Thunder 24-16.

Both undefeated teams put up a good battle in front of the hometown Humber crowd and even OCAA men’s rugby convener Alex Paris said it was the most contested game of the year.

But from the Hawks’ point of view, assistant coach Darryl Snider said Algonquin presented a different challenge that the Hawks were not used to. “They were more physical,” said Snider. “We play a run and gun kind of style.”

The Thunder gave the Hawks a scare in the second half by coming within one point of Humber’s lead making it a 17-16 game.

Captain Jason Chuck was sent in to play for the first time since sustaining a knee injury in the home opener, and said he did his best to keep his team thinking positive so they could stay in control.

“The more you talk on the field the better you’ll do,” Chuck said. “I was telling the guys where to move and repeating the plays just to keep them up and loud. When you start getting tired you just want to breathe but if you do both by staying loud, you can’t fail.”

However, the one point lead brought an air of panic on the bench, but Chuck said his mindset is what helped him through.

“You have to know when the game is yours,” Chuck said.

“One mentality I’ve had while playing for Humber is deep down the other team know’s they’re going to lose. They’ll put up a fight but they know deep inside that they’ll lose, they just don’t know by how much.”

In the last few winning seasons Snider said the team was able to get away with a simple style of play because they easily blew out most teams. But this year Snider said the challenge was to get the team to buy into a new system of play that involves more running and athleticism.

Rugby looks like a violent and rough game but Snider said the point of the game is to create space and use contact as a last resort.

“If you play good rugby you’re not in contact a lot, that’s the idea but it doesn’t always happen,” Snider explained. “You’re supposed to find gaps, make space and run through the space, not always running through a player.”

Paris said rugby is a very technical and tactical game with a philosophy of continuity.

“There’s a territorial aspect, it’s not just running and smashing. Part of the game that’s hard to teach is kicking the ball. Kicking helps by putting pressure on the other team; you’re giving the other team possession of the ball but if you kick the ball far enough you can put pressure on them deep in their zone.”

But what Paris also appreciates about Rugby is that size doesn’t define a player’s skill.

“Big or small, every player must be able to run, pass and block,” Paris said.

With the 15-man rugby season over, Chuck has already set his sights on rugby 7s, which he said is the true test in the game.

“Because there are fewer players, that creates field space and that tests good defence.”