Is bullying an issue in sports? 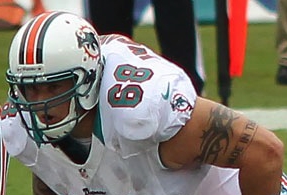 Richie Incognito of the Miami Dolphins suspension for bullying has raised questions about how much bullying goes on it sports. (Image Courtesy of Wikicommons)

The issue of bullying has forever been linked to the playground and children.

Because of the news of alleged bullying by Richie Incognito of the Miami Dolphins on one of his younger teammates, many people are now starting to take a look at if bullying is an issue in sports.

What needs to be made clear is the difference between initiation and hazing/bullying.

Initiation is something veteran players do to rookies in order for them to earn their stripes and respect with their teammates.

Many athletes will tell you it is a part of the culture and “the code”.

Hazing is a more serious offence of initiation in which older players bully younger players in a way that is no longer beneficial for the bonding of a team, but entertainment for the veterans.

“Player to player yes rookies do things like cleaning up stuff after practice and getting the gear off the bus,” said Kyle Brooks, a member of the Niagara Knights soccer team.

What Brooks notes is that bullying younger players is not acceptable but initiation into the group is part of the brotherhood.

He said that when he was a rookie they all shaved their heads when they joined the team.

Where the line is crossed is when the pranks and fooling around is no longer about the brotherhood of a team.

“At our varsity team meetings at the beginning of the year it is quite clear that there is to be no hazing,” said Chateau noting there would be immediate consequences.

“That could be suspension, suspending the entire team, cancelling a team for the season, there is a range depending on the severity.”

If bullying does take place it can weaken a team, says Brooks.

“Teams are families, bullying is something that can break down a program.” said Brooks.

Chateau said bullying has not been an issue at Humber and he hasn’t had to deal with any incidents.

As for rookies, Cheateau said they will always try to fit in when joining a team.

“You are always going to find the freshman athletes finding their way within a team but when you think about hazing is this really an activity you would partake in, in any other environment?” said Chateau.

Cheateau pointed to the example of the men’s rugby team, which he said has taken a good approach to helping rookies adjust.

“A returning veteran player is paired off with a rookie player to help him through the transition process, so certainly rookies are trying to find their way and good team’s veterans will help them through that process.”