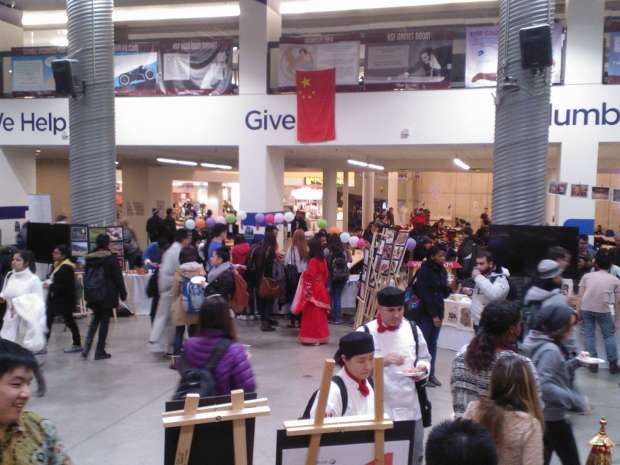 The week, which is celebrated globally, allows students, faculty and staff at Humber to learn about parts of the world they may otherwise have no interaction with or knowledge of.

“The purpose of the event is just to expand the knowledge of all the other students and staff here at Humber,” said Matthew Keefe, the event’s organizer and International Student Advisor at Humber’s International Centre.

“It’s to open their eyes and let them know about the different cultures we have” at Humber, he said.

The actual celebrations, which runs for one day at the North campus, are part of a busy week, Keefe said.

“There’s been workshops all week,” said Keefe.  “Faculty has been doing different things in the classroom to help students get acquainted with the different countries and cultures.”

Cultures from all over the world were represented, with a primary focus on the Asia and Southeast Asia, as well as the Middle East.  Countries including India, China, Indonesia and Israel were among those represented.

The booths that were set up offered the respective country’s national cuisine, pamphlets with tourism information, and even special performances by students showing off a certain nation’s traditions.

Israel’s booth even aimed to present a different side of that country.

“I’m here to break some myths,” said Ron Greenberg, the Israeli booth’s student ambassador and international student who is majoring in sustainable energy and building technology.

“When people hear the word Israel they think of what they see on the news and think it’s just politics and war. I want to show people that most of the time there is no war and it’s still very safe to visit.  People continue to live their lives in co-existence.”

The countries represented were picked depending on where the student ambassadors came from, Keefe told Humber News.

“I’ve learned a lot,” said Anthony Thorpe, from the Food and Nutrition Program.

“[The representatives at the booths and performers] are very creative people and you can see that just by the things they do, like those people using chop sticks to pick up marbles. I have no idea how they do that.”

“I’ve never seen anything like this before,” Thorpe of the entire event.

“I’m from the other side of the world, actually, because I’m from Jamaica, and to be exposed to this right now is really fun. To look at their culture, the things that they have, their food, the stuff that they can build, it’s all amazing to me.”