Homelessness a danger for 9 in 10 families in low-income GTA highrises: Study 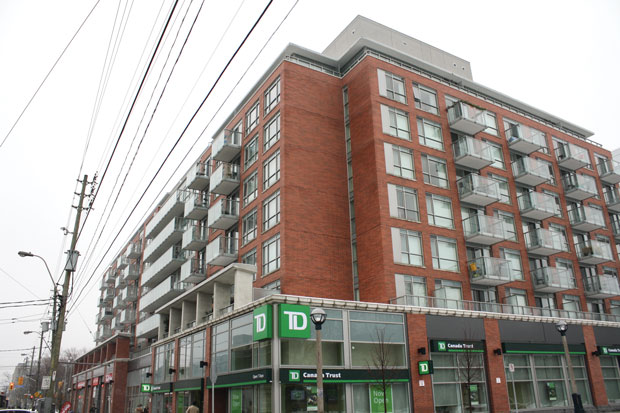 A national housing strategy would contribute to affordable housing, such as these units located at 100 Lower Ossington Avenue.  Photo: Justin Vasko

Nine out of ten families living in low-income highrises are at risk of becoming homeless, according to a new University of Toronto study.

The study, published by Emily Paradis, a senior research associate with the University of Toronto’s Factor-Inwentash Faculty of Social Work and Cities Centre, analyzed over 1,500 families with children who rent units in low-income highrises built between 1950 and 1979, including both social housing and private units throughout Toronto.

Paradis said although she knew of issues facing these populations, she was surprised by the scale of the study’s findings.

“Having the ability to combine all [the] indicators and look at how many families are experiencing at least one major problem with their housing and discovering it was nine out of ten families was higher than I’d anticipated,” she said.

The study used set indicators to gauge the adequacy of a family’s housing and determine their risk of homelessness. These indicators were the affordability of their housing, whether their housing was overcrowded, unsafe or insecure and the condition of the respective units and buildings.

Families who did not face any of the set indicators were defined as being adequately housed, and those who faced five to six of the factors were seen as in critical risk of homelessness.

An element of Paradis’ findings which she said she found particularly concerning was the over-representation of racialized, immigrant and woman-headed families.

“It makes it clear that while poverty and affordability are a key component of the housing crisis, at the same time, discrimination is very clearly in the picture,” she said.

“As our city becomes more unequal and more polarized, it’s also becoming more segregated. It’s clearer and clearer that racialized groups and immigrants are being pushed into a state of greater and greater marginalization. This urgently needs to be addressed.”

In the study, more than 80 per cent of the families surveyed were immigrants and/or belonged to racialized groups, and 37 per cent were headed by a lone parent, “almost always a mother.”

Nov. 22 is National Housing Day, and Paradis is quick to point out that Canada’s lack of a national housing strategy sends an unclear and unfocused message to a city that, her study has found, deeply needs increased affordable housing stock.

“It’s not just about the message, it’s [also] about the funding,” she said.

Paradis is not alone in wanting to see action instead of talk.

Ontario’s Ministry of Municipal Affairs and Housing expressed concern with the state of housing policy at the federal level.

May Nazar, a senior communications officer with the Minsitry said in an email that recent policies, though positive in the immediate timeframe, betray an uncertain future for affordable housing providers in Canada.

“While we welcomed the announcement, federal funding for existing social housing units will decline from almost half a billion dollars a year for Ontario to zero by 2033,” she said.

“Some have already lost their funding, and many more will in the next few years. Without sustained federal funding, facilities deteriorate, necessary repairs and improvements cease and the current number of rent-geared-to-income tenancies cannot be sustained.”

Looking to the future

With an eye to the future, Paradis says she is concerned about how new construction projects, particularly those contributing to Toronto’s condo stock, will age.

As highrises are built with an eye toward smaller, more expensive units, issues of overcrowding and unaffordability, like those found in the study, could worsen in the coming decades.

“All of this development is happening, and yet, none of it is being harnessed to produce housing that is truly affordable for low-income families,” Paradis said.

“The failure to plan these very dense communities with the needs of families in mind is setting us up for serious problems down the road.”

He said that he was concerned with how today’s urban expansion isn’t geared toward fostering communities, and how it focuses on a narrow, fiscally-lucrative demographic.

Officials from the City of Toronto were unavailable to comment for this article.