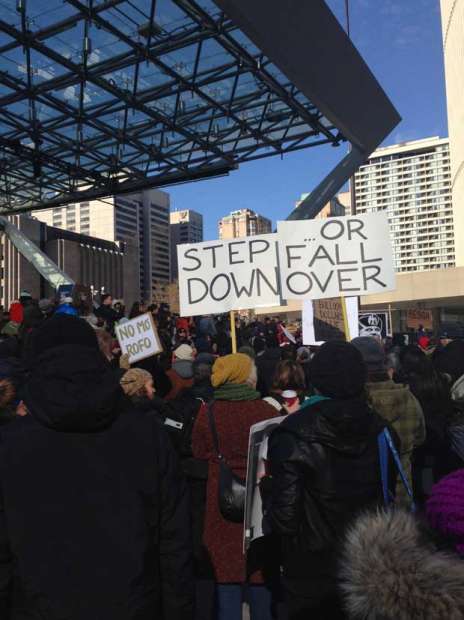 It seems like nothing short of a citizen revolt can force Toronto mayor Rob Ford out of office.

On Nov. 13, Toronto city council voted 37-5 in favour of a motion asking Ford to take a leave of absence, but it amounts to little more than a strong urging from council.

Despite the overwhelming vote genuine action is hindered by a lack of legislation allowing council to force the mayor to resign, said University of Toronto Professor Graham White.

“The council can’t do anything period. Any change would have to come from the provincial government. They would have to pass a bill in the legislature to amend the Municipal Act to make it possible for councils to get rid of mayors.”

The only way the mayor or councillors could be required to leave office is if they were convicted of a criminal offence, said White.

Save Toronto Spokesperson Nikki Thomas said a petition to get Ford out of office has been signed by more than 1600 people who were at the Nov. 13 rally. She says she hopes city councillors will go to the provincial government for assistance in his removal.

Thomas said the provincial and federal governments have the opportunity to cast a vote of non-confidence to force an executive member to resign but municipalities do not hold this power, “which is an oversight.”

The province could pass emergency legislation to amend the city of Toronto Act and give council the authority to remove the mayor from his position,” said Thomas.

The act of forcing a mayor to resign is an unprecedented one in the province, and White said amending legislation for Ford’s removal is possible but doubtful.

“Technically, they could do it very quickly, but it’s highly unlikely they’re prepared to do that because it just opens all kinds of very difficult questions,” said White.

As for all the recent scandals relating to the mayor, Thomas said Ford seems to really know his power.

“I think part of the reason he’s acting like such a spoiled child is because he knows that nobody can actually force him to resign.”