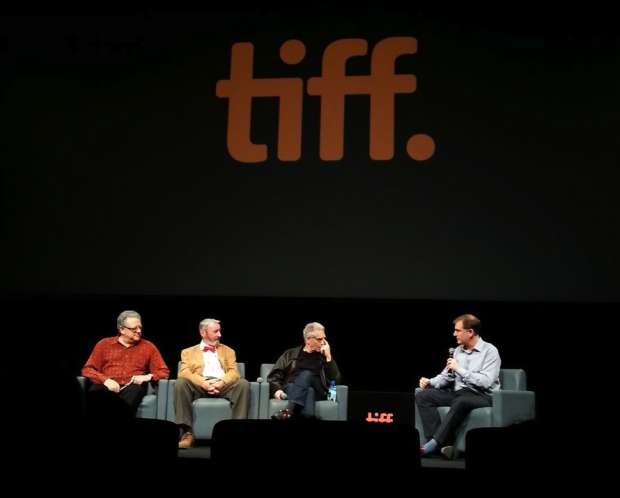 By Espe Currie and Jade Leung

To launch the exhibition, the director appeared on a panel with two collaborators – makeup and effects artist Stephan Dupuis and producer Jeremy Thomas, to discuss collaboration in film production.

The three discussed some of the finer points of collaborative film work, including difficult film actors, storyboard challenges, funding and spontaneous creativity on-set.

The talk was structured around three of Cronenberg’s films – Naked Lunch, Crash and A Dangerous Method.

Cronenberg emphasized the importance of preproduction as an opportunity for collaborators – including producers, makeup artists like Dupuis and even actors – to create the look, feel, and ambiance of the film.

“It begins with the script … but it’s never enough to show you what it really looks likes,” Cronenberg said.

“There’s still a lot of work, and there’s so many variables and so many possibilities. The script, even a detailed one, it begins with a tone, but then you have little epiphanies, moments that clarify which way to go.”

All three panelists noted the organic nature of independent film-making – that without large studio backing, a film has an opportunity to develop organically.

Thomas, a producer, said this is an important aspect of a director’s process.

“A great director takes ideas from everybody and then he makes it his own,” Thomas said.

“It’s a sort of transference. That’s the whole point of collaborating on films. It takes many but there’s one person that makes a decision.”

After the discussion, the trio fielded questions from the audience – largely students from Humber College, Trebas Institute, the University of Toronto and Ryerson University – part of the TIFF Higher Learning project to provide accessible films and film education for students.

David Cronenberg: Evolution is at the TIFF Bell Lightbox from Nov. 1 to Jan. 19. It is the Lightbox’s first large-scale original exhibition, and includes film screenings of all of Cronenberg’s films, from The Fly to Cosmopolis.