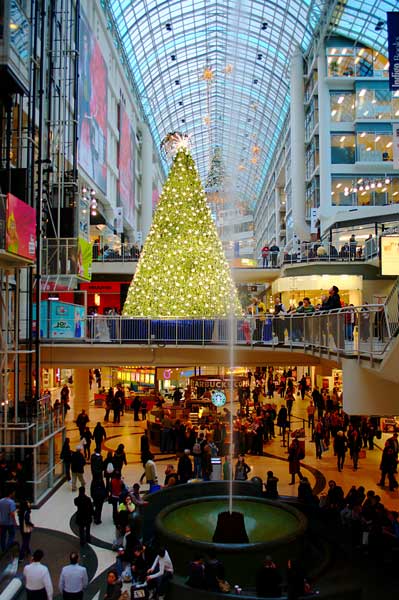 The Eaton Centre. During the holidays, budgeting spending money is the top stress concern for Canadians. Courtesy of: Wikimedia Commons

Balancing a budget is the number one cause of stress for Canadians during the holiday season, according to a survey from PC Financial released Thursday.

The survey said 41.3 per cent of Canadians become stressed when it comes to budgeting for holiday spending. Budget concerns narrowly beat out buying gifts (41 per cent), managing time (31 per cent), paying post-holiday credit card bills (29 per cent) and consuming calories (25 per cent).

Anthony Pak, a financial advisor with Sun Life Financial, said people should allocate what they can afford to spend and save.

“If the holiday season is a special time of year for them, which for a lot of people it is important and rightly so, they should plan ahead for that.,” Pak told Humber News.

He says one way to help budget spending money is to have a pre-authorized chequing account. Money is regularly taken out and put into a savings account.

“Right off the bat there is some money parked away that is being saved,” Pak said.

For college and university students on OSAP, budgeting money can be even more stressful. Terry Bedford, financial aid officer at Humber’s Financial Centre, said students on OSAP need to remember what the money is for.

“We tell them that the money they are given is for the school, not for them to go out and spend on gifts and trips,” Bedford said. “They will have to learn how to budget properly.”

Bedford said one way for students to make money while cutting excess costs is to find work-study jobs at school.

“You’re working on campus so you’re not travelling and you’re not spending any travel money or anything like that,” she said. “They work around your timetable so you can work after class. You can work whenever you want to.”

Once the holidays are over, money still needs to be budgeted for incoming credit card bills.

“Have an action plan on trying to pay down that as quick as possible,” Pak said. “Maybe dialing back in the first few months is important.”