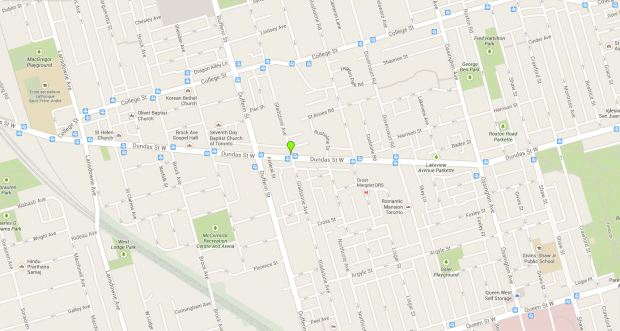 A man and woman are battling life threatening injuries after a two alarm fire at a semi-detached residential building near Dufferin and Dundas Ave.

Toronto Fire Services were called at 7:47 a.m. to a three-story residence at 224 Gladstone Ave., Fire Capt. Mike Strapko told Humber News. The fire trapped a woman and man on the third floor.

“Twelve fire trucks and 45 firefighters were on scene,” Strapko said.

Firefighters rescued a woman from a third floor window by ladder. They then entered the home and rescued a man from the third floor. They both suffered from burns and smoke inhalation.

“The woman had burns on 90 per cent of her body and was revived twice by us”, Toronto Fire Services division commander Andrew Kostiuk told Humber News.

“Paramedics treated and stabilized a man and woman on the scene with injuries sustained by the fire and continued to treat them on the way to the hospital,” Kim McKinnon of Toronto EMS told Humber News. “Once the patients are transported to hospital, EMS is not given any further information regarding patients,” said McKinnon.

The fire started in the kitchen. Kostiuk said it seems as though someone was cooking and left a pot on the stove unattended.

“Kitchen fires are fairly common in Toronto; we have about 300 per year which is almost one per day,” Kostiuk said.

Six other people were in the home and able to get out. A neighbour using their own ladder assisted in the rescue, Kostiuk said. It is not yet known how many people resided in the home.

“We’re investigating but it looks like it was probably a rooming house with 6-8 people living there,” said Kostiuk.

“There are requirements for rooming homes and some of them seem to be missing”, said Kostiuk. He also said there appeared to be a lack of proper smoke alarms. Toronto Fire and the Office of the Fire Marshal are currently investigating.