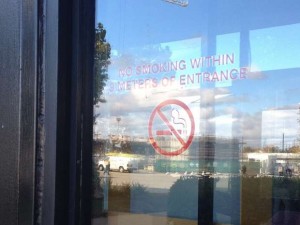 “No Smoking” sign outside of Humber College. Photo by Julia Grabowska.

A smoking ban in Toronto parks has been unanimously passed by the parks and environment committee.

With the proposed ban moving to a city council vote, if it is passed smokers could be fined $300 for lighting a cigarette within nine metres of certain park amenities. They include sport fields, beaches, skateboard parks, ski hills, swimming pools and the Toronto Island Ferry Dock.

The Ontario Lung Association told Humber News it is in full support of the smoking ban, and congratulates the parks and environment committee on its decision.

“There is no safe level of exposure to second-hand smoke,” George Habib, president and CEO of the Ontario Lung Association said in a statement sent to Humber News.

“The health of individuals and their right to breathe freely must be protected,” the statement said.

The association hopes that councilors will support the ban when it is brought to council in November.

According to the Canadian Partnership Against Cancer, Toronto has been recently ranked the second worst city in Canada in terms of second hand smoke exposure.

“An important reason for this would be for modeling,” Lingard said. “We know that kids and people in general are quite susceptible to the modeling of people’s behaviors. If we were to minimize this observation of smoking that clearly isn’t healthy, then it is probably a good thing.”

In addition to the concern of individuals being vulnerable to second hand smoke, cigarette butts are another thing the committee wants to get rid of.

Councillor Mary Margaret McMahon (Ward 32 Beaches-East York) said that cigarette butts are a large issue for her part of the city.

“I don’t know what the mindset is of someone who just tosses a cigarette butt and thinks that’s not litter,” she told the Toronto Star.

Similarly related to the smoking park ban, city council will also decide whether to ban smoking within nine metres of public building entrances and public squares on Nov. 13.