‘Suspicious’ fire at Bathurst and Dupont under investigation 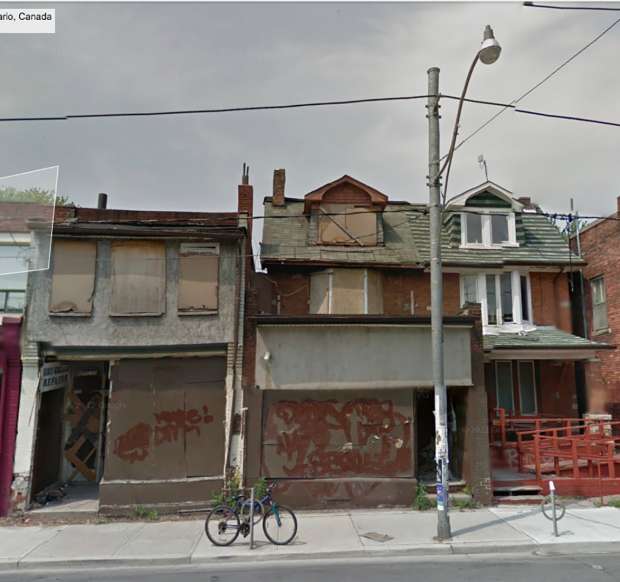 A fire at 1002 Bathurst St. (on the left) is being treated as “suspicious”, Toronto Police confirmed.

Toronto Police are investigating a “suspicious” fire that broke out at Bathurst and Dundas Streets early this morning, a Toronto Police detective told Humber News.

“The Fire Marshall has been called in and they are presently on scene, as well as police from 14 division,” said Det. Robert MacInnis from the Criminal Investigation Unit at 14 Division, which encompasses the location of the fire.

The second and third floors of the unit, 1002 Bathurst St., were engulfed in flames when police arrived at 5 a.m., Det. MacInnis said.

Fire officials quoted in a CTV report said squatters were suspected to have started the fire.

“We have received information in the past of people squatting at the location,” Det. MacInnis said.

Jennifer Hunter, chair of the local residents’ association in the area, affirmed it was widely known among residents that squatters have inhabited the building.

“The building has been left derelict for years,” Hunter, from the Seaton Village Residents’ Association, told Humber News.

A development for the location was approved in August, Hunter said, after two redevelopment applications earlier in the year were denied.

“We were pleased that there was interest from developers, because we thought it was an unsafe structure for the community.”

Michael Shapcott, director of housing and innovation at the Wellesley Institute, a non-profit community agency, said squatting happens “a lot” in Toronto.

“We often don’t find out about squatters until something tragic like this happens, or more tragic.”

Shapcott said there are hundreds of abandoned buildings in the city that could be transformed into habitable living spaces but that there isn’t enough funding for such projects.

“There’s a severe lack of funding to address such issues, from both the federal and provincial government.”