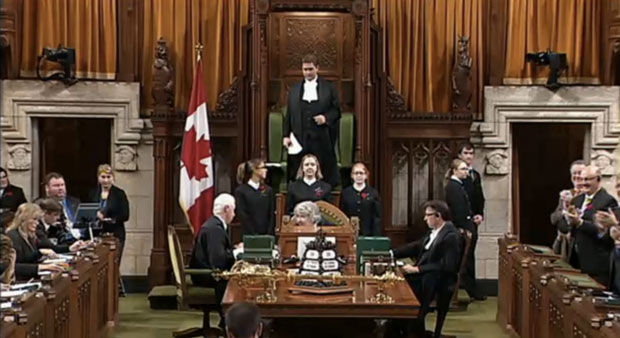 The Senate’s Conservative caucus met Monday to determine the appropriate punishment of senators Mike Duffy, Pamela Wallin and Patrick Brazeau. The three senators are facing suspension without pay after a Deloitte audit found they made inappropriate expense claims.

When the scandal first broke last spring, the prime ministers then chief of staff Nigel Wright said he gave Duffy $90,000 to repay his bills. Wright said at the time that he resigned from Harper’s office, the Toronto Star reported.

LISTEN: Insights on the Senate

However, Harper said in an interview with a Halifax radio station today that, in fact he ‘dismissed’ Wright.

NDP and Liberal party members voiced their concerns at the Senate today against the Conservative party’s involvement.

LISTEN: Should the Senate be reformed?

“I don’t like the way its being done,” Jim Maloney, Liberal MP for Etobicoke-Lakeshore told Humber News.

“It appears that a whole lot of it is us being led to believe allegations made by the senate, however there are more documentation out there that remains to be seen,” said Maloney.

Robert Asselin, the associate director of the graduate school of public and international affairs at the University of Ottawa, told Humber News that firing the senators will create a dangerous precedent.

“If they do fire the three senators it will create precedent which basically any senator will be able to bring a motion and submit to a colleague senator should be fired and obviously this has never been done and senators start doing that they think its outrageous if they.

No decision will be made on Monday to overturn the motions to suspend Brazeau, Duffy and Wallin.

#Duffy doubts his colleagues would have participated in such a ‘monstrous’ attack had they know the disputed sum was the price of a coffee.

Those emails, #Duffy says, prove that this ‘monstrous fraud’ was entirely arranged by PMO.

In fact, #Duffy says, that meeting was arranged on Feb 11, when he met with Wright at Langevin. Well, there’s that visitor log explained.

#Duffy‘s speaking time has expired, so no questions or further comments. #Carignan appears to have left the Chamber, but LeBreton remains.

If true, #Duffy‘s latest allegations *would* explain why PMO was so quick to come out with lines on that RBC cheque last week.

Andreychuk, too, seems to be suggesting any lament at a lack of ‘due process’ is tantamount to criticizing the all-party committee. #SenCa