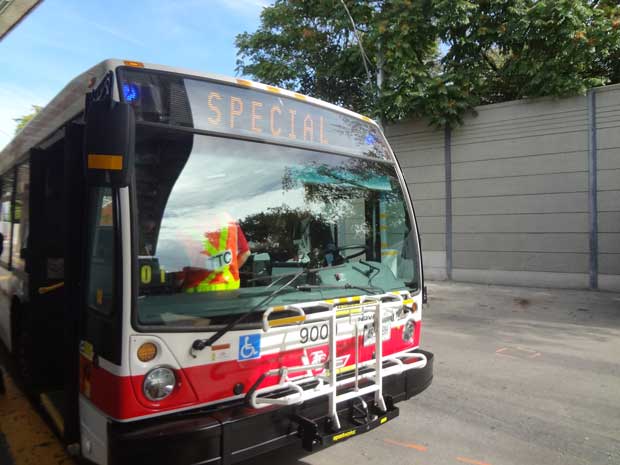 The “Bendy” bus will accommodate 45 per cent more customers than the standard TTC bus.

Toronto Transit riders can expect no immediate raise in fare prices as new buses roll out this year.

The new articulated “bendy” bus will be introduced to the city in December with 45 per cent more capacity for riders.

Andy Byford, CEO of the TTC, said the current $3 cash fare price should not be affected by the new buses.

“The actual introduction of these buses has no impact on the budget whatsoever,” Byford told Humber News.

“Whether there’ll be a fare rise that’s a matter for the commission and ultimately city council when we get to talk about the wider budget.”

With the big spending already allocated to the new buses, Byford said the TTC will be saving on operating costs.

“We actually save money by introducing these buses because at the end of the day there’s slightly less buses on each route but they still only have one driver so it’s actually a more efficient operation,” said Byford.

Byford said the 18 metre buses can accommodate 77 passengers and are being introduced to combat  congestion at busy stops.

The first route to get the bus will be the seven Bathurst route and then next will be the 29 Shepherd route in January next year.

Peter Piotrowski, customer service representative for NovaBus, said the buses are made by Canadian company NovaBus and contain no American content.

Piotrowski said compared to the current fleet of  buses, the new buses’ design focuses more on accessibility, comfort and convenience.

“The ergonomics of the bus are totally redesigned. The driver is more comfortable at his work station. The bus has a little bit of a futuristic appearance,” said Piotrowski.

Byford said he is confident that the buses will be a big success on Toronto’s biggest routes.

“We think we thought of everything, I’m really looking forward to getting the testing done and getting these buses in service,” said Byford.

The prototype that was unveiled is 100 per cent Canadian, made of stainless steel, fully air-conditioned and contains three exit doors.