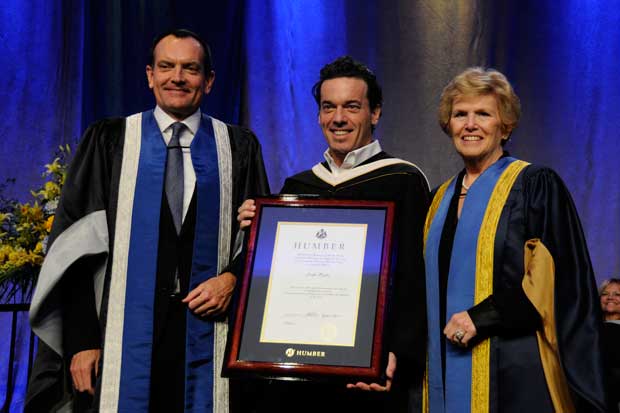 “To be honoured in such a way is tremendous,” Boyden told Humber News.

“To be given an honorary degree means that the institution that is honouring you thinks you are worthy of speaking for them, not just now but in the future.”

In his commencement speech, Boyden gave the crowd some unconventional advice.

“You will fail at some point, and probably more than once, “said Boyden. “Failure, especially at something important, builds strength, builds resolve. My first two attempts at writing a novel were complete and utter failures.”

Boyden is no stranger to success in the literary world, though.

His novels have won the Rogers Writers’ Trust Award, the Scotiabank Giller Prize, and his newest novel, The Orenda, is nominated for the Governor General’s Literary Award.

Humber President Chris Whitaker told Humber News he thought it was great to have Boyden at convocation, as he is a great contemporary writer and because of his connection to Humber.

“I’m a personal fan of his,” said Whitaker. “I’ve read all of his books and as soon as I wrestle his latest book from my wife, I’ll be able to read that one too.”

Boyden’s work focuses on the role of indigenous peoples in both historical and modern Canada, from a joint-biography of Gabriel Dumont and Louis Riel to Cree snipers in World War I to the modern realities of life on and off-reserve for Native peoples.

“Those who think Canadian history is dull have not read Joseph Boyden,” Sileika said.

Boyden, who spends some of his time in the Mushkeguwok near James Bay, sees connections between historical and modern realities. In a speech he gave at the University of Alberta in 2008, titled Mixed Blood Highway, Boyden described the rise of a grassroots movement much like Idle No More.

“Anyone with their ear to the ground and is watching how First Nations people are being treated, and they aren’t being allowed into the conversation– we’re going to make the conversation. And it’s not going anywhere and it’s nothing to be afraid of.”

With another federal election coming up within a couple of years, Boyden said that the focus will be on where people want the country to go both environmentally and economically.

“Whenever you think economics, you can’t separate out the environment,” Boyden said, commenting on the recent events at Elsipogtog First Nation in New Brunswick.

“I think Idle No More is going to play a role in the discussion when it comes who is going to be leader and for what reasons.”

One motif Boyden uses to describe the current state of affairs is windigo- a cannibalistic monster that plays a role in his first novel Three Day Road.

“I understand the idea of the windigo and the fear that if you speak of the windigo out loud, it will come back. But I wrote this historical novel to also comment on the contemporary and the present. I think windigo hadn’t come back. I think it’s already here and that we constantly have to combat it. I think it’s here in all different ways in our country. I think it’s here when people get too greedy. ‘Oh, let’s go to these oil sands’, for example, and try to draw out the energy from them in such a way that is incredibly damaging to the environment. That’s not a healthy attitude to me.”

Boyden said the way to combat the windigo is to strangle it by opening a dialogue.

“We talk about our past, and we don’t forget about that,” Boyden told Humber News. “If we don’t know our past, we don’t know where we are going, and that’s a huge message in all of my work.”