Idle No More spans Canada for National Day of Action 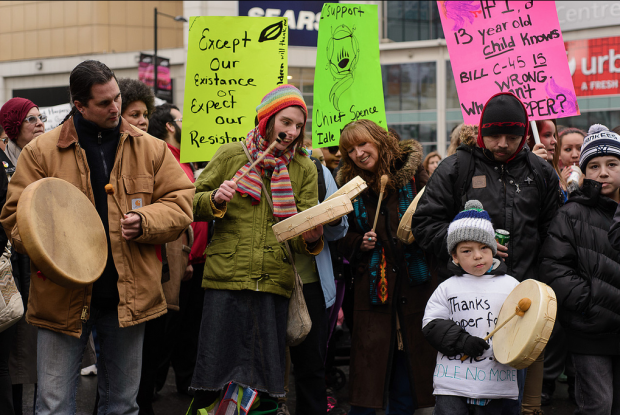 Idle No More planned over 63 protests across Canada on Monday as part of a National Day of Action, called Oct7Proclaim.

The movement’s vision, as declared on their website, is to “call on all people to join in a peaceful revolution, to honor Indigenous sovereignty and to protect the land and water.”

Demonstrations were scheduled in communities ranging from Sudbury, Hamilton and Toronto in Ontario to Edmonton and Lethbridge in Alberta and Vancouver.

On this day 250 years ago, King George III implemented the Royal Proclamation of 1763, which defined the relationships between native people and the government. The movement is hoping for solidarity events in over 12 countries, including the United States and Britain. Observers will be watching whether the movement still has the energy and intensity it displayed last winter.

The Idle No More initiative began a year ago via e-mail exchange with four women in Saskatchewan, and quickly grew into one of the biggest protest movements Canada has seen in years.

Dawn Harvard is the first vice president of the Native Women’s Association of Canada.

Harvard told Humber News she thinks while the original message of Idle No More may have been lost to many Canadians, the group still has a chance to show what they’re standing for.

“Within the actual First Nations themselves and the people who started (Idle No More), and the political leadership, (those people) are still very clear on what their demands and directions are,” Harvard said, referring to “environmental concerns like resource extraction and the protection of waters. If we don’t have clean water and safe, clean land to live on none of it matters anymore.”.

“For the average citizen, the understanding of what it’s all about is not there and that’s probably largely because things have become mixed up in the media. If nothing else, (the hope is that Canadians have) the realization that, ‘I don’t know what’s going on with First Nations people, maybe I need to (read more) and have the understanding and be informed,’” she said.

Defenders of the Land is a network of Aboriginal activists who have been taking action in their respective regions over the course of the last 20 to 30 years.

Arthur Manuel is the founder of the organization. He told Humber News his group has an alliance with Idle No More and shares many of the same values.

“We’re called Defenders because we are dealing with oppression. Some of our guys have been in the middle of the struggle. We’re really on the small side of a big struggle.”

People gathered at Yonge and Dundas streets in downtown Toronto for the Idle No More 2012 rally.