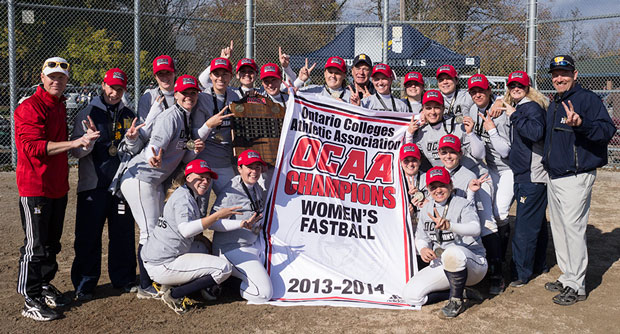 By Faiza Amin and Thomas Rohner

Humber’s women’s fastball team stormed back from a 5-0 deficit to clinch their second consecutive provincial gold medal on Sunday.

Humber faced a St. Clair’s squad in the finals—a team that had beat the Hawks four out of five games this year, won the division championship and taken home every award at the annual awards banquet last week.

But Keira Lansley, a veteran on the Hawks’ team, told Humber News that the team never gave up.

“Every inning we went up to bat, we would keep saying, ‘this is it, this is our inning’. We didn’t want to go down without a fight.”

Lansley, who was the MVP of the championship game as well as an all-star for the weekend tournament, hit the tying run in the bottom of the sixth inning.

“It was such a nervous feeling being out there on the field. The intensity of the game was already so high so when we went into extra innings it was just nerve wracking.”

Jacqueline O’Quinn hit a blooper just outside the infield to score the go-ahead run in the bottom of the eighth inning, electrifying her teammates and the crowd.

“Watching that happen, and knowing we had just won and come back from 5-0, that was the best feeling ever because our work had paid off,” Lansley, who was on base at the time, said.

Jim Bialek, manager of athletics at Humber and president of the Ontario Colleges Athletic Association, attributed this victory to veteran leadership.

“We did not have one leader on this team. When we called up a captain, there was no captain, all the seniors came up. This was veteran leadership, very simple,” Bialek told Humber News.

Bialek said this year’s team built off the success of last year’s championship team, but that it extends to all Hawks teams.

“Teams that have been there, that have won, they don’t seem to get rattled…winning breeds winning, calmness breeds calmness. We have a Hawk family: everybody goes to watch everybody play. And you get things from watching other teams play, other teams win.”

Lansley and Bialek agree that this game was special and will be remembered for years to come.

“I think that we all take away the feeling that you can’t give up,” Lansley said. “As long as you stay positive, anything can happen. Just going into this weekend, we wanted to win so badly, and I think that’s what gave us an edge over other teams. It just came down to who wanted it more.”