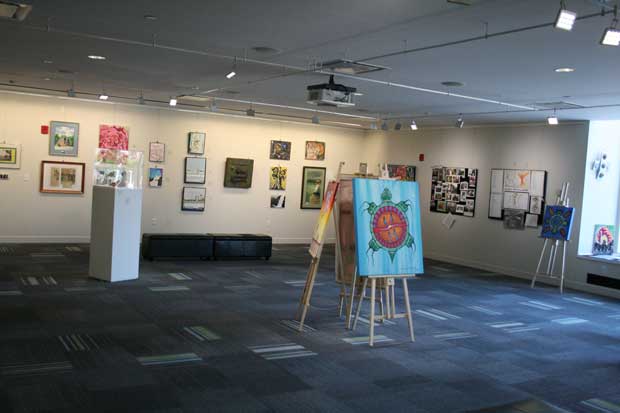 By Alyssa Capistrano and Brian O’Neill

An art exhibit at Humber’s Lakeshore campus is offering a way for people to turn the pain of sexual abuse into personal creativity.

The exhibit called Transforming Trauma, is by the group called The Gatehouse, which provides support for victims of childhood abuse in Toronto.

Alexander Payne, a young adult support group facilitator with the group, said the exhibit is a great way to give a voice to those who might otherwise go unheard.

“People send in art from all around the world and we display it,” Payne told Humber News.

“The purpose is to transform trauma into triumph from sexual abuse survivors, so we are trying to support that world.”

Transforming Trauma is the first exhibit of its kind at Humber for the support group.

Maria Barcelos, the volunteer administrative coordinator for Gatehouse, said the response has been encouraging.

“We had just over 100 people attend the opening and a lot more people are coming through now,” Barcelos said.

There are various forms of art on display, including paintings, sculptures, poetry, drawing and photography.

Barcelos said art is a way for trauma victims to reclaim their voice.

“I think that art is a very effect tool to express oneself and their emotions,” she said.

“A lot of times there are a lot of deep emotions that are tied to being a survivor of childhood abuse. Art is an effective medium to express those emotions.

“Some people have been able to express it through poetry, or drawing or painting, instead of word,” Barcelos said.

In addition to the art gallery, the group has other events and exhibits planned for Humber.

One of the biggest will be something called a healing garden, a 56 square meter area near the Lakeshore campus to grow vegetables that will be donated to local food banks.

The Transforming Trauma exhibit runs at the Lakeshore campus until Oct. 11.