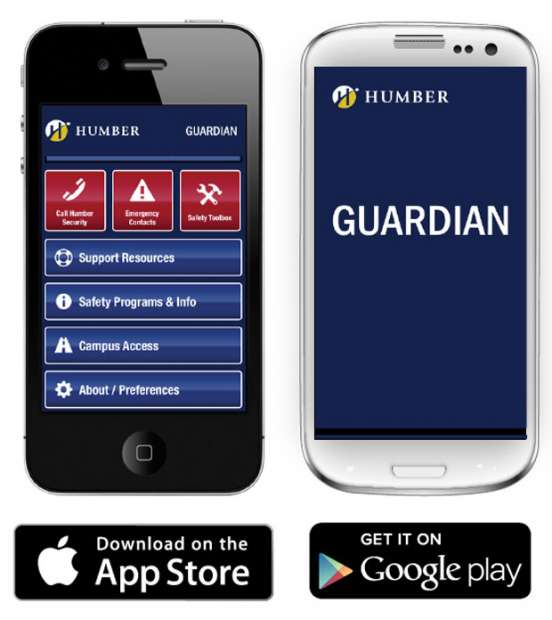 Humber Guardian app is available to Apple and Android users for free via the App Store and Google Play. SOURCE KEITH PUA

Keith Pua, public safety coordinator told Humber News that the app was created by Humber’s department of public safety as part of its mandate to provide a greater sense of security for students and staff.

“We’re looking at ways to better communicate with students and staff,” said Pua. “Most people have smartphones, so we thought it would be a good fit to introduce an app to make our services more available.”

Pua said the app features one-touch calling to Humber Security and Emergency Services, navigation services, a personal alarm, flashlight as well as the ability to email questions, comments and photos to public safety.

There is also access to campus maps, public transit contact and route information as well as information for services like, the Toronto Distress Centre, Crime Stoppers, and the Centre for Addiction and Mental Health.

The app also gives users the ability to send photos to public safety.  “Once you take a photo the app will prompt you to send it to Public Safety through email,” Pua said.  “Public safety’s email will already be in the address bar and all you need to do is push send.”

“The idea behind the app is great,” Humber’s emergency telecommunications program director, Gord Gilmour told Humber News.  “If I have a button that grants me access to emergency services, it’s a great tool to have.”

Gilmour said he would be cautious about relying solely on an app in an emergency situation. “Technology is a great tool, so long as it connects us to the right people,” Gilmour said. “In an emergency you don’t have time to go through prompts.  You need to get through right away.”

Pua said the app provides users with one-touch access to all information and is very user friendly. “Emergency and non-emergency phone lines are available at the push of a button,” he said.

The app is new to the market, but Pua said it has so far  been well received. “People are happy to have easy contact and another form of communication with us,” he said.

The free app is available to Apple and Android smartphone users today and will be available to Blackberry users within the next month.