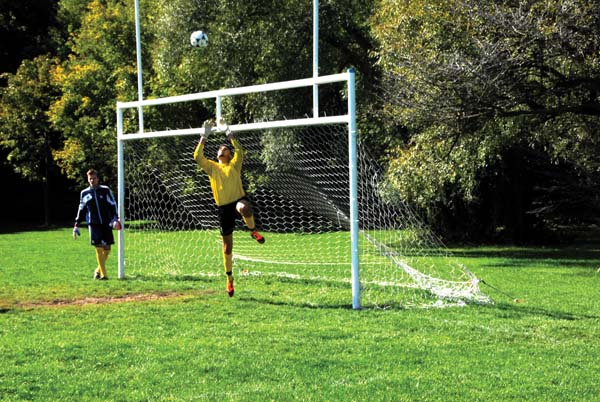 Being the champs is one thing, but going for a fourth title in a row might be considered the beginning of a dynasty.

The Humber Hawks men’s soccer team is set to play their first playoff game of the OCAA playoffs knowing they have a target on their back.

The Hawks have captured the provincial title three years in a row and are looking to make 2013 their fourth. But, what makes this year different is they are also looking to defend their national championship.

“We all feel the pressure,” said Jay Garro, the Hawks goalkeeper, who was part of last year’s winning squad.

“The new guys don’t feel it as much as the returning players because we have been there and won it they don’t know how big this really is.”

Not only are the Hawks looking to win for themselves but for the players before them.

“For the returning guys there is more pressure from the guys who didn’t come back this year, we just don’t want to hear them say we blew it.” said Garro.

Before they can defend a national title they need to survive the OCAA playoffs which has been nothing but interesting thus far.

Humber finished with a record of six wins, one loss and a tie, good enough for a share of first place in the West division.

The Hawks only loss came to the Niagara Knights in the second game of the season.

Proving how big it is to defeat Humber, Knight’s defender Kyle  Brooks said it was history for their squad.

“It was not just team history but history for our school,” said Brooks.

“After that win we got OCAA team of the week.”

For the Hawks the loss was a dose of a reality that they needed.

“Losing that game was probably the best thing to happen to us…it made us realize we weren’t invincible,” said Garro.

“We realized we weren’t going anywhere unless we came together and work as a unit instead of individuals.”

From that point on Humber never lost a game and only allowed two goals against.

Now entering the playoffs fresh off a bye the Hawks will face off with Fleming, a team they have yet to face, but Garro isn’t worried.

“We know we can compete with any team here and we know what every team will come out and do against us,” said Garro.

“All we have to worry about is ourselves and making sure we come out with more intensity than our opponents.”

Niagara is a team to watch out for in the playoffs as the Knights won a qualifying match and now are in the quarter-finals with the confidence of knowing they beat the best team in Ontario.

“The season started slow but as we built as a team together we figured out how to get the job done week in and week out,” said Brooks who has seen a big difference in the level of competition on the pitch this season.

“Every team had a large amount of freshman which meant the wins were always up for grabs.”

With a competitive season out of the way the post-season should be no cake walk for even the Hawks but tasting defeat once was enough for Humber and Garro says the Hawks are primed and ready.

“We have had a great record and it definitely gives us confidence knowing what we’ve done this far, we are ready for any team.”