Ford video exists but mayor will not resign 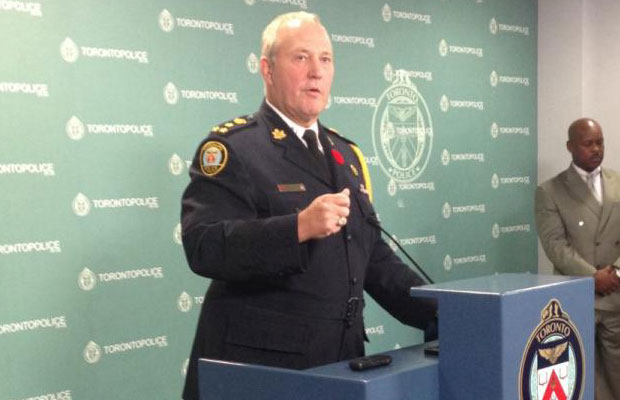 “I wish I could come out and defend myself, but unfortunately I can’t because it’s before the courts,” said Ford.

“I have no reason to resign. I’m going to go back and answer my phone calls and do what I’ve been elected to do.”

Sandro Lisi, who is charged with extortion in relation to the Ford video, will be appearing in court at 9am on Friday.

The Rob Ford saga continued as Toronto Police Chief Bill Blair announced Thursday that police are in possession of a long-rumoured video depicting the mayor.

Reports of a video showing the mayor smoking crack cocaine have circulated for months.

While Torontonians awaited the release of documents pertaining to the Sandro Lisi case Thursday morning, police scheduled an impromptu press conference regarding the Brazen 2 investigation – the investigation that led to Lisi’s arrest Oct. 1.

At the conference, Blair confirmed the video does feature Ford.

Blair began by saying a “digital video file” had been found buried in the hard drive of a suspect earlier this week, and while he was initially reluctant, he did acknowledge that video did, in fact, feature the mayor.

He also announced Sandro Lisi had been taken into custody facing extortion charges in relation to the video.

Police believe he may have been responsible for keeping the video from both media and the investigation.

When asked about rumours the video had been doctored, Blair said, “there’s no indication that that has taken place.”

The police chief also said over the course of their investigation, “no one has been treated differently because of who they are.”

Blair said he’d seen the video himself and added, “I’m disappointed. This is traumatic for the citizens of Toronto.”

The video was first reported in May by Toronto Star reporters Robyn Doolittle and Kevin Donovan.

Some doubted its existence, but Doolittle said Thursday, “we knew what we saw.”

Doolittle said the story was right out of a movie.

“It was a great day in the newsroom,” Doolittle told CP24.

The shockwaves from today’s bombshell reached as far as Ontario premier Kathleen Wynne.

When pressed for comment, she said it was not her place to pass judgment.

“It’s for the police to deal with. I really don’t have a comment on what was released today. It’s up to the justice system to deal with these issues.”

Former deputy mayor Doug Holyday was similarly mum when confronted with confirmation of the video.

Holyday has long been skeptical of its existence, but in light of today’s events he said, “if they say they saw something, they saw it.”