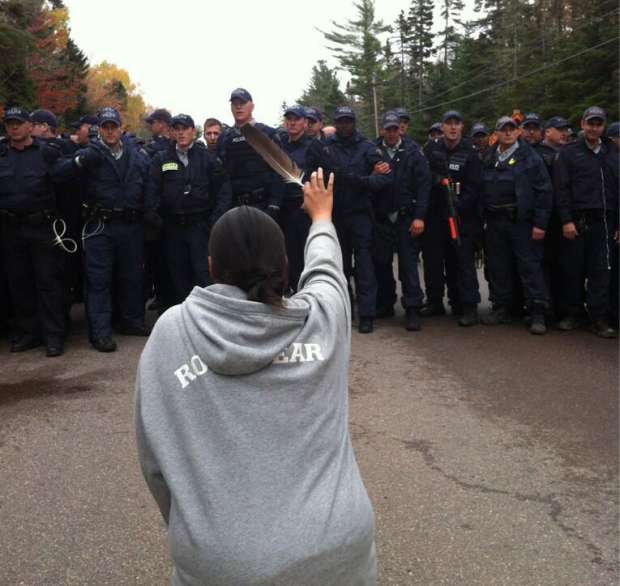 RCMP faced off against protestors near Rexton, N.B. Image posted to Twitter by @Osmich.

Demonstrations across the nation are in the works in support of the Elsipogtog First Nation and the campaign against hydraulic fracturing (fracking).

On October 17, the RCMP arrested at least 40 people as the police enforced an injunction against protestors who had set up a blockade south of Rexton, New Brunswick.

According to Rexton Mayor David Hanson, the village is now quiet and has only the usual police detachment present.

The atmosphere in nearby Moncton was very different this afternoon as those arrested yesterday made their first court appearance.

“It’s an ugly day in court today,” said Peter Dauphine, a member of the Council of Canadians who was at the Moncton provincial courthouse.

“A lot of arrests were made and a lot of these charges are quite serious.”

The protests and arrests have sparked a number of planned demonstrations across Canada and the United States.

On idlenomore.ca, dozens of events have been started in cities from Vancouver to Washington, D.C.

In Saskatoon, approximately 100 demonstrators gathered at College Drive and Wiggins Avenue, one of the city’s busiest intersections to show their concern over fracking and the violence at the N.B. protest.

“We sent prayers of support to people put in harm’s way who we have seen on the news,” said Dion Tootoosis, cultural liaison with the University of Saskatchewan’s aboriginal students centre.

“We also sent prayers to the RCMP so that cooler heads prevail and that excessive force isn’t needed.”

Tootoosis, who belongs to the Poundmaker Cree Nation, emphasized the demonstration was not just in support of First Nations, but also to bring attention to fracking and its environmental consequences.

“We were offering solidarity, earnest, honest and truthful solidarity to situation that is happening with the anti-fracking initiative put forward by the people of the Elsipogtog and all of the surrounding communities of that area.”

The Council of Canadians is a social action organization that has a chapter in Moncton. Angela Giles, who is with the council, spoke with Humber News about the organization’s stand on fracking.

“We want to see our provincial and federal leaders taking more leadership in changing the direction we are going in relation to our energy needs and moving it more in a sustainable, green direction.”

Mayor Hanson said that while he and Rexton village council recognize that oil and gas exploration may be a good economic development tool, assurances on safety are needed.

“Our stand here as council is that we need assurance that it can be done safely and that the proper regulations are thoroughly enforced, before we can accept it at face value.“