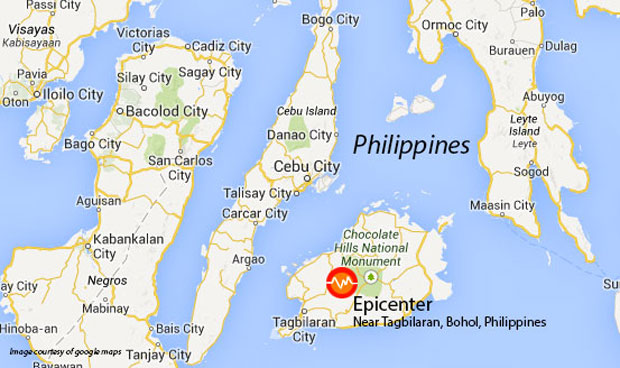 The earthquake epicenter was in Bohol province, an island home to over 1.6 million people. Map by Jake Kigar

A powerful earthquake that struck the central Philippines on Tuesday has killed at least 93 people.

The 7.2 magnitude quake hit at 8:12 a.m. local time on Oct. 15, near Tagbilaran, Bohol.  The epicenter was recorded as being 33 kilometres below the surface of Carmen City.

According to CTV News, Bohol police chief Dennis Agustin said 77 of the deaths came from Bohol province, at least 15 others died in the nearby Cebu province and another on Siquijor Island.

Bohol and Cebu suffered a lot of structural damage, including the collapse of four bridges and some government buildings.  Roads aren’t accessible, with many cracked or covered with debris from landslides.

The Philippines is located in the Pacific “Ring of Fire,” where earthquakes and volcanic activity are common.   Dr. John Clague, professor of natural hazards research at Simon Fraser University spoke to Humber News and said that because of its location,“the Philippines is notorious for large earthquakes.”

“The linear zone is home to the Pacific Ocean tectonic plate,” Clague said.  “The plate moves relative to plates around it and it’s subducting under the Philippine Sea Plate creating compressional stress or force.  That force causes the earthquakes.”

Clague said this same force happens here in Canada under the North American Plate along the west coast.  He said earthquakes of the same magnitude happen here too.

“We can assume with long distances the earthquake won’t affect us here.  We can’t know for sure, but it’s difficult to estimate statistics based on the distance between the two countries,” Woodgold said.

Karen Snider at the Canadian Red Cross sent a statement to Humber News that said, “Philippine Red Cross volunteers and staff were mobilized immediately after the quake to verify damage reports. The PRC emergency response unit, which is well trained and equipped for collapsed-structure search and rescue operations, is being prepared for possible deployment to the most affected areas.”

Philippines president Benigno Aquino III said he would travel to Bohol and Cebu on Wednesday to survey the area, telling reporters in a briefing “many of the structures there are old.”

Oct. 15, is a national holiday in the Philippines, Eidul Adha (Feast of the Sacrifice).  Many places, including consulate services are closed and could not be reached for comment.

Below are some images of the destruction