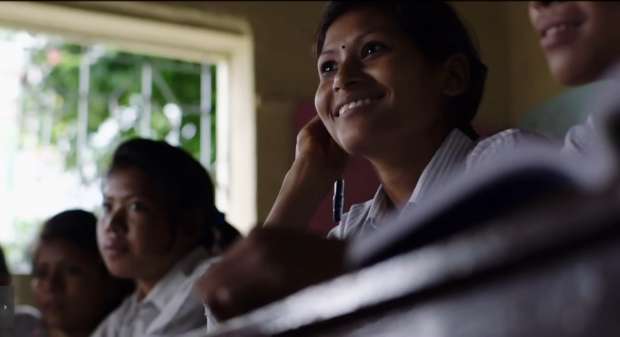 A new documentary is pushing to raise awareness around education for girls in developing counties.

Plan Canada’s movement, Because I Am A Girl, will be the force behind today’s second annual International Day of the Girl.

The focus of the documentary is ensuring a girl’s education by showing how crucial it is in formative years.

Because I Am A Girl,  focuses on the struggles that every girl faces in developing countries, where women are often given second-rate opportunities and denied open access to education.

Dena Allen, corporate communications manager with Plan Canada believes Girl Rising, a documentary about raising awareness for female education in developing countries, “shows the transformative power of education and what it can have in a girl’s life.”

“The purpose of the film today was to talk a little bit about some of the issues [that girls are facing] around the world, shedding a bit of a light on that, but also, to really talk about the power of girls,” said Allen. “While we want people to realize some of the discrimination that girls face, we also really want to talk about the power girls have to change their lives, to change their communities and ultimately their countries. One of the ways they can do that is through education.”

According to the United Nations website, there has been an improvement in recent years, but many girls — especially the marginalized — continue to be denied the right to an education.

“Girls in many countries are still unable to attend school and complete their education due to safety-related, financial, institutional and cultural barriers, according to the website. “Even when girls are in school, perceived low returns from poor quality of education, low aspirations, or household chores and other responsibilities keep them from attending school or from achieving adequate learning outcomes.”

According to the UNESCO Institute for Statistics, about 65 million girls do not attend primary or secondary school, even though with an education, girls are six times less likely to end up married as children.

Additionally, the UNFPA (the United Nations Population Fund) states when a girl is educated, she will likely have 2.2 few yet healthier children, and according to a study by The World Bank, she will increase contributions to household income by an average of 18% (for every year she’s in school, her income can increase by 15-25%).

“It’s been proven that educating girls is the magic bullet to be able to improve not only girls’ lives, but also the lives of their families, their communities…girls who have access to at least nine years of basic education, they do much better in life. Their children are healthier, they’re going to get better jobs…education is definitely the key to improving the lives of girls,” said Allen.

Info from UNESCO Institute for Statistics. About 65 million girls worldwide don’t have access to an education – something we often take for granted.

While there remains a very high number of young girls still not enrolled in schools, the efforts made by Plan Canada have assisted in making that number drop. Girls in developing countries are the most at risk cases for not being provided an education, but the numbers are even staggering for developed countries, with the United States having the fourth largest population of girls not enrolled in school.

“Girls all around the world, including here in Canada, have the right to access education and that is what we’d like to see,” said Allen.

Screenings of the documentary Girl Rising occurred in several Canadian cities, including Toronto’s Bloor Hot Docs Cinema. There are ongoing fundraisers and events for Because I Am A Girl throughout the year, helping girls worldwide one step at a time.